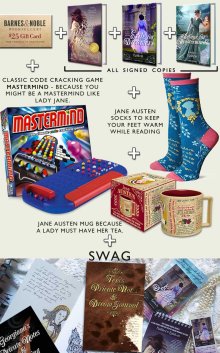 THIS GIVEAWAY HAS NOW ENDED. THE AUTHOR SELECTS THE WINNERS AND CONTACTS THEM.

Enter to win the first three books in the Stranje House series. Plus a $25 Barnes and Noble Gift Card, Swag, Jane Austen Items and the Mastermind Code Breaking game. The books will be signed!

A School for Unusual Girls - A Stranje House Novel, #1

It’s 1814. Napoleon is exiled on Elba. Europe is in shambles. Britain is at war on four fronts. And Stranje House, a School for Unusual Girls, has become one of Regency England’s dark little secrets. The daughters of the beau monde who don’t fit high society’s constrictive mold are banished to Stranje House to be reformed into marriageable young ladies. Or so their parents think. In truth, Headmistress Emma Stranje, the original unusual girl, has plans for the young ladies—plans that entangle the girls in the dangerous world of spies, diplomacy, and war.

After accidentally setting her father’s stables on fire while performing a scientific experiment, Miss Georgiana Fitzwilliam is sent to Stranje House. But Georgie has no intention of being turned into a simpering, pudding-headed, marriageable miss. She plans to escape as soon as possible—until she meets Lord Sebastian Wyatt. Thrust together in a desperate mission to invent a new invisible ink for the English war effort, Georgie and Sebastian must find a way to work together without losing their heads—or their hearts….

A School for Unusual Girls is a great next read for fans of Gail Carriger’s Finishing School series and Robin LaFevers’ His Fair Assassin series.

Tess can't run far enough or fast enough to escape the prophetic dreams that haunt her. Dreams bring nothing but death and grief, and Tess refuses to accept that she may be destined for the same madness that destroyed her mother. Until her disturbing dreams become the only means of saving Lord Ravencross, the man she loves, and her friends at Stranje House from Lady Daneska and her lover, the Ghost-agent of Napoleon, who has escaped from Elba. Can the young ladies of Stranje House prevail once more? Or is England destined to fall into the hands of the power-mad dictator?

It’s 1814. Napoleon has escaped his imprisonment on Elba. Britain is at war on four fronts. And at Stranje House, a School for Unusual Girls, five young ladies are secretly being trained for a world of spies, diplomacy, and war….

Napoleon’s invasion of England is underway and someone at Stranje House is sneaking information to his spies. Lady Jane Moore is determined to find out who it is. If anyone can discover the traitor, it is Jane—for, according to headmistress Emma Stranje, Lady Jane is a mastermind.

Jane doesn’t consider herself a mastermind. It’s just that she tends to grasp the facts of a situation quickly, and by so doing, she’s able to devise and implement a sensible course of action. Is Jane enough of a mastermind to save the brash young American inventor Alexander Sinclair, her friends at Stranje House, and possibly England itself?