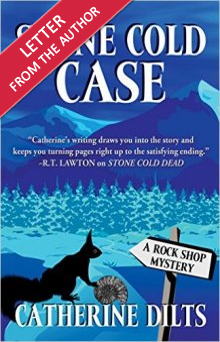 Where do you get your ideas? Readers often ask this question, and sometimes it is difficult to answer. I can tell you exactly how the idea for Stone Cold Case began. An image from a camping trip got stuck in my head.

The image? A simple hunting blind. If you aren’t familiar with these, let me describe this particular one. A gulley washed a V shape into a low cliff. At the tallest, the V was maybe six feet high, and at the widest, three feet. Over the V was a roof of pine branches. A blue tarp hung over the roof and covered the entrance.

A hunter could hide behind the tarp, watching deer as they went to drink from a nearby creek. Long unused, the tarp hung in tattered shreds.

On a multi-family camping trip, the young folks decided the hunting blind made a great slide. They hopped on top of the roof, fell through, and slid down the gulley.

With my writer’s imagination, I wondered what would happen if the kids uncovered bones underneath the rotting leaves padding the gulley. What if the remains were of a person who had been missing a long time? Would the family still be in pain, wondering what had happened to their loved one?

The image stuck with me for a long time before a story began to gel. I changed the hunting blind into a prospector’s dugout. Many of these dugouts have survived a hundred years in the Colorado Mountains, and they have the same air of creepy decay as the hunting blind. I kept the shredded blue tarp.

Now for the cold case. When Carly Kruger vanished sixteen years ago, most folks in the small mountain town of Golden Springs assumed the prom queen and beauty pageant contestant had run away to Hollywood. She had a lot to escape, they reasoned, including an alcoholic mother. Others thought the prom queen and beauty pageant contestant could have died while hiking in the mountains. No one suspected the sweet, beautiful young woman could have been murdered.

Without a body, neither theory can be proved, until forty-something widow Morgan Iverson discovers human remains in a prospector’s dugout.

Rock shop owner Morgan Iverson's discovery of human remains reopens a cold case and unhealed wounds in a Colorado mountain town, while her find of a rare gemstone sparks a dangerous treasure hunt.

The remains are those of Carlee Kruger, a prom queen who vanished fifteen years ago. Carlee's mother asks Morgan to investigate. A Sasquatch look-alike may hold the key to both Carlee's death and the gemstone, but he eludes the police, despite repeated sightings by an elderly cowboy and the rock shop's donkeys. As she uncovers the past, Morgan becomes the target of someone determined to keep the truth buried.

To Catherine Dilts, rock shops are like geodes – both contain amazing treasures hidden inside their plain-as-dirt exteriors. Catherine caught mountain fever after a childhood vacation in Rocky Mountain National Park. Determined to give up her flat–lander ways, she moved from Oklahoma to Colorado. Her husband, a Colorado native, proposed to her as they hiked Barr Trail on Pikes Peak. Catherine works as an environmental scientist, and plays at heirloom vegetable gardening, camping, and fishing. Her short stories appear in Alfred Hitchcock Mystery Magazine. In her spare time, she attempts to lure wild donkeys to her property in the mountains.