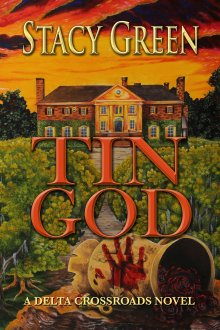 Today we are giving you an exclusive first look at the cover for Tin God by Stacy Green!

Born in Indiana and raised in Iowa, Stacy Green earned degrees in journalism and sociology from Drake University. After a successful advertising career, Stacy became a proud stay-at- home mom to her miracle child. Now a full-time author, Stacy juggles her time between her demanding characters and supportive family. She loves reading, cooking, and the occasional gardening excursion. Stacy lives in Marion, Iowa with her husband Rob, their daughter Grace, and the family’s three obnoxious but lovable canine children.