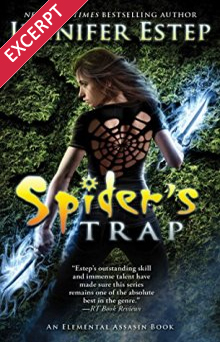 Keep your friends close but your enemies within stabbing distance.

One important lesson I’ve learned in the assassination business is that to be the best you have to roll with the punches. Now that I’m queen of Ashland’s underworld—by default, not by choice—a lot more punches are being thrown my way. But I suppose that’s the price of victory for taking down some of the underworld’s top dogs. Good thing I have my Ice and Stone magic to help me survive my volatile new position. Just when I think things are finally settling down, someone tries to murder me during a hush-hush underworld meeting. But the real surprise is how strangely familiar my shadowy assailant seems to be.

My job is to maintain order among killers, crooks, and thieves, and soon I’m embroiled in a bloody game where the ability to keep secrets could be the greatest superpower of all. My enemies have all sharpened their knives and laid their traps, waiting for me to fall. But this Spider weaves her own webs of death …

“This series kicked off with a bang, and the action hasn't let up since.” – Fresh Fiction

“Estep’s outstanding skill and immense talent have made sure this series remains one of the absolute best in the genre.” – RT Book Reviews

FROM THE FIRST CHAPTER:

“I really want to stab someone right now.”

Silvio Sanchez, my personal assistant, glanced at me. “I would advise against that,” he murmured. “It might send the wrong message.”

“Yeah,” Phillip Kincaid chimed in. “Namely that you’ve reverted back to your deadly assassin ways and are going to start killing people again instead of hearing them out like you’re supposed to.”

“I never really left those ways behind,” I replied. “Considering that I could kill everyone here and sleep like a baby tonight.”

The three of us were sitting at a conference table that had been dragged out onto the deck of the Delta Queen, the luxe riverboat casino that Phillip owned. Normally, slot machines, poker tables, and roulette wheels would have been set up on the deck in preparation for the night’s gambling, but today the riverboat was serving as a meeting spot between some of Ashland’s many underworld bosses.

Supposedly, this meeting was to be a peaceful mediation of a dispute between Dimitri Barkov and Luiz Ramos, two of the city’s crime lords, who were disagreeing about who had the right to buy a series of coin laundries to, well, launder the money that they made from their gambling operations. Not that there was anything peaceful about the way that Dimitri and Luiz had been standing nose-to-nose and screaming at each other for the last five minutes. Their respective guards stood behind them, fists clenched tight and shooting dirty looks at each other, as though they would all love nothing more than to start brawling in the middle of the deck.

Now that would be entertaining. I grinned. Maybe I should let them have at each other, gladiator-style. Winner take all. That would be one way to settle things.

Silvio nudged me with his elbow, as if he knew exactly what I was thinking. “Pay attention. You’re supposed to be listening to the facts so you can be fair and impartial, remember?”

“I could be fair and impartial in stabbing them both.”

Silvio gave me a chiding look.

I sighed. “You always ruin my fun.”

“That’s my job,” the vampire replied.

I palmed the silverstone knife hidden up my sleeve—the only weapon I’d brought on board—and flashed it at my friends under the table, out of sight of the bosses and their men.

“C’mon,” I whispered. “Just let me stab one of them. Surely, that will shut the other one up too.”

Phillip snickered again, while Silvio let out a small, sad sigh. He wasn’t crazy about my managerial style. Couldn’t imagine why.

By a Thread - Elemental Assassin, #6

Jennifer Estep is a New York Times and USA Today bestselling author prowling the streets of her imagination in search of her next fantasy idea.

Jennifer writes the Elemental Assassin urban fantasy series for Pocket Books. Spider’s Trap, the 13th book in the series, will be released on July 28.