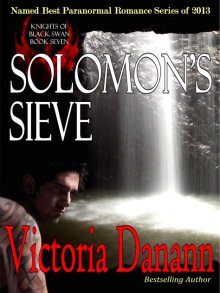 Join the order. Book 7 in the Black Swan series is here!

We recommend this series be read  in order. Start with My Familiar Stranger. It's FREE!

This is a TOP PICK series.

When Sovereign Solomon Nemamiah lay dying on a beach under an overturned vehicle with his fiancé helplessly sobbing next to him, he made a vow to himself that he would refuse to stay in some arbitrary afterlife. He silently promised to return and finish what he started with The Order of the Black Swan and the love of his life. When the new Sovereign of Jefferson Unit begins saying and doing things that remind people of Sol, it raises suspicion in the minds of people who were closest to him.

The mutated and more aggressive strain of vampire virus surges back to the forefront of The Order’s priorities forcing retirees to be recalled and trainees to be inducted earlier than ever before.

Meanwhile, The Order sends Z Team with its newest member, Glendennon Catch, to escort new recruit, Dr. Mercedes Renaux, to Bulgaria. Her mission is to shut down and investigate an archeological site that may contain irrefutable evidence that vampire exist. Their mission is to protect her.

When the big day came, Sol borrowed Storm’s silver convertible Porche roadster. Storm had never driven it to California because he didn’t need it there. It had been parked in the underground at J.U. for months without use, but it turned over when Sol pressed the ignition. There were two seats in the car and not much room in the trunk, but most of what Farnsworth would want and need was already at her cottage. It was too cold to put the top down, but convertibles are romantic even when the tops are up, wind noise and all. They have a way of making a vehicle’s occupants feel young. And sexy.

On the trip down they chatted easily about places where they’d been, people they knew in common, and bucket list items even though it was still early in life for them to be composing bucket lists. When they were twenty minutes away, they made a grocery stop at the last supermarket en route. They bought more than the space left in the trunk, but Farnsworth was a good sport and laughed about sharing the passenger seat with one of Sol’s duffels between her legs. It was cool but sunny when they arrived and the March wind was doing its reputation proud. Sol pulled the car underneath the house between thick weathered support pillars. There was a store room and guest room next to the carport, but the two floors she used as real living space began twelve feet above ground level. He carried groceries and bags up the stairs while she opened up the house. That involved engaging the motorized storm shutters, lighting the pilot and turning on the heat plus her favorite part of the ritual – affixing a unicorn flag to its holder on the deck.

“There,” she said turning toward Sol with a grin. “Now we’re officially in residence.”

He stared at the flag for a minute. “A unicorn?”

She laughed. “Beautiful, isn’t it?”

It was a blue and white unicorn on a light gray background. And it was beautiful. As unicorns go it was dignified with a fine proud head, flying mane and long elecorn.

“I guess.” His scowl was more obligatory than sincere, lip service to the code of macho. Using an armload of logs from the half cord of firewood on the deck, Sol built a fire to warm up the cottage while they were waiting for the small gas furnace to do its job. When everything was put away, they drank a glass of wine and made love in front of the fire on a white rag rug that was so thick it felt like a pallet. When Sol had assured her that he had the resources to take her anywhere she wanted to go, she had immediately formed images of having him in her house. And, once that vision had taken root, it appealed to her more than anything else she could think of. Farnsworth was so accustomed to relaxing at the cottage and letting work stress dissolve away that her nervous system responded to the environment automatically and put her in getaway mode. Sol, on the other hand, had muscles that were knots on top of knots on top of knots. If he had ever known how to relax, it had been decades in the past and, certainly, the idea of “vacation” was foreign to his nervous system. So he fidgeted and paced and suggested things to go and do. She sat watching him, casually sipping chardonnay, in a yellow cable sweater the same cheerful color as the cottage.

He stopped abruptly, his gaze going toward the ocean. “A walk on the beach?” He looked and sounded as if he’d never heard of such a thing.

“What for?” She chuckled and shook her head. “Just because. Go put on enough layers to keep you toasty and we’ll go see what there is to see.” He looked dubious. “Come on. It’ll be fun. I promise.”

“You promise?” His face split into a grin.

“I do.” He swore he liked the sound of that, but he would have also sworn that he would hate walking on the beach. Maybe that would have been true under other circumstances, but doing things with Farnsworth just made them different.

She had a way of transforming ordinary experiences into extraordinary events, simply by virtue of being there. She taught him to like walking on the beach by changing his perspective. She pointed out sights like little birds that ran on the sand so fast you almost couldn’t see their skinny little legs and little crabs that ran out of holes on some unseen errand and then retreated to safety just as fast. Now and then she’d point to the remains of a seashell and tell him what kind it was. Through her eyes his consciousness was raised to appreciate the way sunlight dances on water, the way the color of the ocean changes to try and match the color of the sky, the way brightly colored windsocks whip in the wind against a blue sky background and make the whole world feel festive. He began to see through her eyes, hear through her ears, feel her sensations, and little by little, day by day, the layers of tension fell away and she saw, for the first time, what his face looked like when the muscles were lax and not held rigid as steel.

One day he picked up a stick and threw it for a retriever someone was walking on the beach. When he turned back to her with a laugh and a glorious heart stopping grin she said, “Solomon. You’re so lovely when you let go.”

His grin resolved into a smile. “Lovely? If you say so.”

“I do.” He liked the sound of that every time he heard it.

“I was just aiming for nice looking. Did I overshoot?” She laughed. “Indeed you did. By fathoms.”

“I think I’m keeping you.“ He pulled her into a kiss that was far too passionate for a beach they shared with passersby. She thought about pulling away, was sure that pulling away was the appropriate thing to do, but her body was making the case that life was too short for propriety. So she returned his kiss with enough fervor to make sure he knew she meant it.

The days melted away into the closest thing to pure happiness that Sol had ever known. He didn’t remember feeling that happy or carefree even in childhood. And that was the state of his euphoria when the call came that he was needed at Headquarters immediately. The furrows in his brow reappeared instantly, the lines around his eyes were deeper, and the smile that had become perpetual disappeared.

She nodded as he promised to come right back if he could. He gave her the keys to Storm’s roadster and a soft, lingering kiss goodbye. When he reached the end of the deck he turned back once to see her watching from inside the glass door. She waved and his heart responded with a reluctance to go. He’d never before had a hard time with the call of duty and he cursed under a heavy sigh when he confronted just how much he didn’t want to leave her or that place. He would have given just about anything to stay right where he was.

Nominated for Best Paranormal Romance Series of 2014 IRC READERS CHOICE AWARDS – Voting in September. Victoria Danann is also up for Author of the Year.

More in the Series - To be read in order:

If you’re looking for something new and different in PNR, you’ve come to the right place.

I write unapologetic romances with uniquely fresh perspectives on paranormal creatures, characters, and themes. Add a dash of scifi and a flourish of fantasy to enough humor to make you laugh out loud and enough steam to make you squirm in your chair. My heroines are independent femmes with flaws and minds of their own whether they are aliens, witches, demonologists, psychics, or past life therapists. My heroes are hot and hunky, but they also have brains, character, and good manners – usually – whether they be elves, demons, berserkers, werewolves, or vampires.

I have authored and illustrated Seasons of the Witch calendars and planners for fifteen years and teach magickal arts for Seasons in Avalon. I live in The Woodlands, Texas which is why I sometimes joke about being the witch in the woods.