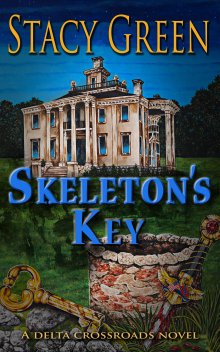 We have the pleasure of having Stacy Green stop on over today to share her latest suspense title.

Many thanks to Tammie for having me on the blog! I’m likely a new author to many of you, so let me tell you a bit about my books. I’m also doing a fun giveaway – comment to win a Skeleton’s Key swag bag complete with magnet, button, and pin!

I write the Delta Crossroads Series, set in the deep south and featuring twisted mysteries with a dash of romance. Fictional town Roselea is based of historical Natchez, Mississippi, and along with a dose of romantic suspense, you will find lots of historical tidbits.

Why mystery and suspense, you might ask? Because I love a good puzzle, and I love getting into the heads of my characters. I always say that if I’d had any sense of my true self in college, I’d have gone into psychology, because I’m fascinated with the choices people make in all parts of their lives. But instead of shrinking heads, I torture my characters and put them into all sorts of trouble.

When it’s written correctly, mystery can be just as much of an escape as romance. A good mystery should draw the reader into the page with the first line, and she should very quickly be compelled to figure out whodunit or whytheydunit, or both. The setting in the books needs to be as vivid as the plot, making the reader feel as though she is smack in the middle of the mystery. If it’s done well, I truly believe lovers of any genre can devour a mystery.

If you’re a die-hard romancer, why not give a sultry Southern mystery a try?

To purchase Stacy’s books on Amazon, visit her author page. You can find her on Nook as well! 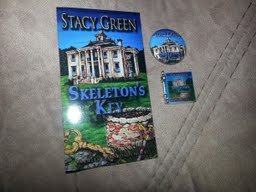 Finding a dusty skeleton in the basement is more than enough for Cage Foster to deal with. But the discovery of two fresh bodies, wrapped in plastic and buried in the cellar during his tenure as the antebellum home’s caretaker, may land Cage on Mississippi’s death row. To prove his innocence, he’ll have to put his faith in a pushy Yankee newcomer, a woman who talked talks too fast and still believes in the romance of the Old South.

Dani Evans purchases Ironwood Plantation and plans to restore the home to its former glory while she rebuilds her life. The grisly discoveries beneath her new home shatter those hopes. After realizing the South isn’t the stuff of her fantasies, she becomes convinced the skeleton is a clue to the legendary Ironwood cache of family treasure. Determined to find answers, she digs further into the mystery and stakes her life on Cage’s innocence.

Cage is certain an old grudge from his past is setting him up for murder, but the evidence against him is mounting and time is running out. Dani believes she can find the truth before Cage is arrested, but her search for answers will uncover a descent into madness that should have stayed buried.