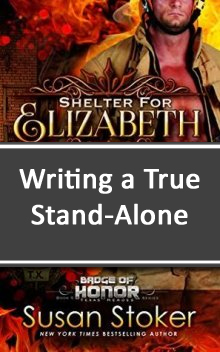 Shelter for Elizabeth is a true stand-alone book. It’s book 5 in the Badge of Honor series, but I never want my readers to feel like they have to read the other books in the series in order to enjoy and understand any of them.

I know a lot of authors claim to write stand-alones, but I really try hard to make each book about a specific couple, and not put too many other characters and their troubles in the story. I’ve read some novels like that and it’s obvious the author is “setting up” the next book in the series. Since I try to write what I like to read, I do everything possible not to do that.

So while this book has a character from a previous book in a previous series, I tried hard to make it so that anyone could pick it up and not be lost. There are those “easter eggs” thrown in that readers of my other books will pick up on, but they’re subtle and if they are caught or not doesn’t detract from the story.

Poor Beth has a lot going against her from page one in this story. She’s survived being kidnapped by a serial killer, only to develop agoraphobia. On top of that, she has found that fire helps her deal with her anxieties…which isn’t a good thing since she’s dating a fireman. :)

Elizabeth Parkins lived through a nightmare come true—getting kidnapped by a serial killer. Seeking a fresh start, she moves to Texas, but escaping her demons proves impossible when she’s too terrified to leave her own apartment. A small, accidental fire sparks a coping method she’d never expected, and brings an amazing man to her door.

Firefighter Cade “Sledge” Turner’s idyllic life ended the day his sister was kidnapped. Now he knows firsthand that tragedy can befall anyone, at any time. Meeting Elizabeth on the job was a gift. Cade can envision spending his life with this woman. He understands what she’s been through, is willing to help her heal…though even Cade is unaware of Beth’s new secret obsession.

As Beth takes steps to help herself heal, and Cade attempts to earn her trust and prove his own, they’re both about to be tested—in a way that could see everything they’ve worked for go up in flames.

* Shelter for Elizabeth is the 5th book in the Badge of Honor: Texas Heroes series. Each book is a stand-alone, with no cliffhanger endings.

New York Times, USA Today, and Wall Street Journal Bestselling Author, Susan Stoker has a heart as big as the state of Texas where she lives, but this all American girl has also spent the last fourteen years living in Missouri, California, Colorado, and Indiana. She's married to a retired Army man who now gets to follow her around the country.

She debuted her first series in 2014 and quickly followed that up with the SEAL of Protection Series, which solidified her love of writing and creating stories readers can get lost in.