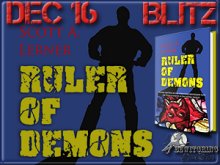 Readers are in for a Paranormal Thriller with Rule of Demons. 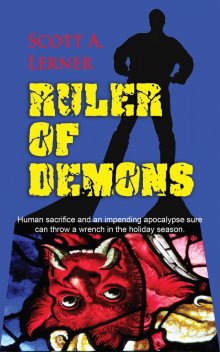 Only eleven shopping days till Christmas. And less than a week to save the world.

Three nuns--in Chicago, Paris, and Jerusalem--have been killed in a religious ritual. The choice of victims and the macabre details of their deaths indicate that someone is following a recipe provided on an ancient text--a recipe to unleash the forces of hell on earth. The final sacrifice must occur on the Winter Solstice.

Samuel Roberts, a small-town attorney in Urbana, Illinois, knows a bit about the supernatural, having triumphed at least once over the forces of evil. Thanks to a friend who is aware of Sam's little known previous efforts on behalf of mankind, Sam is hired by a big Chicago law firm to take on a sensitive case. His mission? Nothing less than halting the impending apocalypse.

Sam and his good buddy Bob travel first to Jerusalem then Paris in a desperate race to save mankind.

I turned the knob to my front door to find it unlocked. I don’t always remember to lock my door so I was not overly alarmed. On the other hand the dead bird combined with the unlocked door did put me on edge. Since my last supernatural entanglement, I had begun to leave a Louisville Slugger in the umbrella rack by the door.

I slowly opened the door. Nothing appeared out of place, but I grabbed the bat and slowly made my way through each room of my house. I found no sign of intruders.

I decided it was safe and put the bat back where I had stashed it. It was almost seven-thirty and I had still not eaten. Not to be critical, but the wake could have used some snacks and Irish whiskey.

I thought about cooking some traditional Irish delicacy in honor of Mrs. O’Neill but the closest thing I had in the kitchen was a year-old box of Lucky Charms. I kept meaning to get to that. My fear of refrigerators had mostly dissipated over the last year, and I decided to risk a roast beef sandwich. I opened the crisper bin and gathered a container of roast beef, some sliced sharp cheddar cheese, and some Grey Poupon mustard.

I placed them on the kitchen table. I was about to retrieve the sourdough bread from the bread box when something caught my attention. In the middle of the table was a silver pocket watch case. I do have a number of watches, but I don’t store them in the kitchen. I also don’t own a pocket watch.

I picked up the case. On the front was an engraving of three stalks of wheat. The kernels where plated in gold. Behind the wheat was a large cross, also in gold.

Yellow guilloche enamel covered the entire back side. The engraving there looked to be of a small shield with a sword behind it. The hilt of the sword had two cross guards. Above the shield, a hat with long tassels framed the sword and shield. There was a tiny hallmark on the neck of the case of Minerva as well as a small diamond with initials inside that had been mostly rubbed away. I could tell there were two letters but I could only identify an “S.”

This case was expensive and well made. If it had been left here by a robber, then they didn’t fully understand their job. I sat down and pushed the button attached to the neck of the case. When the case opened, I immediately recognized my error; this was not a watch case but a pyx—the silver case priests hold the host in.

I understand that the host is supposed to transform into the body of Christ once ingested, but not until it is placed in the mouth. Inside the case was a puddle of blood. The blood surrounded the tip of a severed tongue like a tiny moat.

Some evil force was trying to get me to lose weight by making it so I would never enter this room again. Then and there I decided I would rather dine out for the rest of my life than risk facing another body part in my kitchen.

Then I noticed something else. Like a Satanic fortune cookie, there was a tiny note inside the pyx, under the tongue. The note was written in brown script as though it was penned using a fountain pen and left out in the sun for a generation. It read, “Silence is Golden.”

I had been sitting in stunned silence for a golden moment when the telephone rang.

He is currently a sole practitioner in Champaign, Illinois. The majority of his law practice focuses on the fields of Criminal law and Family Law. Mr. Lerner lives with his wife, their two children, and their cat Fern.

You can find him online at www.scottlerner.camelpress.com