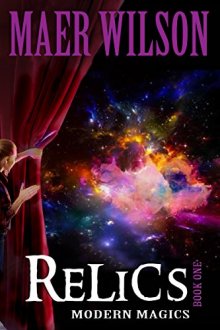 Most of Thulu and La Fi's clients are dead. Which is perfect since their detective agency caters to the supernatural. But a simple job finding a lost locket leads to a big case tracking relics for an ancient daemon.

The daemon needs the relics to keep a dangerous portal closed. His enemy, Gabriel, wants the relics to open the portal and give his people access to a new feeding ground – Earth.

Caught on live TV, other portals begin to open and the creatures of magic return to Earth. The people of Earth are not alone, but will soon wish they were.

When Gabriel threatens their family, Thulu and La Fi's search becomes personal. The couple will need powerful help in the race to find the relics before Gabriel does. But maybe that's what ghostly friends, magical allies and daemonic clients are for.

When the creatures of myth and magic return to Earth, they're nothing like your mother's fairy tales.

When the dead are afraid, there’s a big problem. The fear cut through the abandoned warehouse as sharp as the dagger at my throat. The tall, powerful being easily held me immobile. Breaking promises and lying to ancient creatures who can make you very dead, very fast was not such a good idea.

Humans and non-humans, living and dead, all of us were cautious not to make any sudden moves that would send my captor over the edge.

I tried to take careful breaths. I was terrified, more afraid than I’d ever been in my life and in shock, too. Betrayal and death will do that to you, let me tell you.

Like a car out of control on ice, my thoughts careened all over the place. I could only hope someone in the group was thinking clearer than me. I kept my eyes down to hide the emotions I knew would upset the others. No sense letting Thulu and the rest know just how freaked out I really was.

All I could tell myself was to breathe easy and try not to swallow. There was nothing but silence for long minutes, as both sides continued to wait. No one moved. Even the dead were frozen with fear. Now there’s a scary thought.

After a successful career being other people, and later teaching others the many tricks of that trade, Maer Wilson has decided to be herself for a while. Turns out she's a writer. She's always loved stories, especially fantasy, mystery and sci fi. Maer was born in the Year of the Dragon and has a dragon-themed room in her home, but sadly no dragons in the back yard. When she's not writing, Maer plays online video games, teaches college and reads. Maer is a partner in Ellysian Press, a small publishing house. She also co-hosts the literary podcast MythBehaving. Maer lives in the high desert of Southern Nevada with her three dogs, a chihuahua and two poodles.

Her books include Relics and Portals, Books 1 and 2 in the Modern Magics series. The upcoming third book in the series is Magics. There are also three novelettes in the series - “Ghost Memory,” “Unwanted Ghost” and “Ghost Dancer.” A fourth story, “Wedding Ghost” is also planned. You can find all books and novelettes in the Modern Magics series at Amazon.

For more info, you can visit Maer’s website at http://maerwilson.com/.