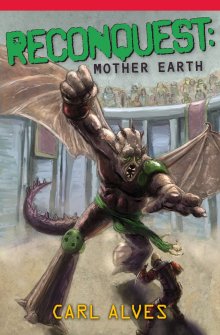 Carl releases his third book. Take a ride with him as you take on some aliens.

SEAL Mitch Grace was among the first humans to see the aliens when they landed at the naval base where he was stationed, but like the rest of humanity, he was powerless to stop them. Five years later, Mitch awakens from a coma under the care of an alien physician to and that aliens control the planet. Starting alone, as a one man army, he rallies the surviving humans to build a resistance movement to take the planet back from the alien conquerors. After his capture by the aliens, Mitch is forced into intergalactic slavery to become a gladiator, fighting as the sole representative of the human species. Against all odds, and far from home, he lays the plans for the reconquest of his homeland.

"Anybody can end the world, but few can do it with the blend of action, suspense,romance and even humor that Alves mixes up in this fantastic novel. A blast for anyone who enjoys a good tale, even those who rarely venture into science action. Highly recommended."

Brett J. Talley, Bram Stoker Award Nominated Author of The Void and That Which Should Not Be.

"A riotous mix of Independence Day and Red Dawn with a taste of the Thunderdome. The apocalypse has never been more fun."

Carl went to Boston University majoring in Biomedical Engineering. Carl graduated with a BS degree, and has since worked in the pharmaceutical and medical devices industries. He later graduated from Lehigh University with an MBA degree. His debut novel "Two For Eternity" was released in 2011 by Weaving Dreams Publishing. His novel "Blood Street" was released in 2012 by True Grit Publishing. His post apocalyptic sci-fi novel Reclamation Mother Earth will be released in 2013 by Montag Press. His short fiction has appeared in various publications such as Sinister City, Alien Skin and Glassfire Anthology. He is a member of the Horror Writers Association and has attended the Penn Writers Conference. You can visit his website at www.carlalves.com.