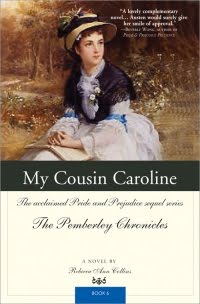 Prize: 1 set of 2 book: The Pemberley Chronicles Book 1 and My Cousin Caroline Book 6.

Books will come from the publisher. USA / Canada Shipping Only - No P.O. Boxes.

Winner must be a member of the NOR newsletter and leave the first portion of their email address on the post.

Many thanks for inviting me to contribute to Night Owl Romance blog!

Some people may question what on earth Jane Austen fans could have in common with romantic Night Owls .Those who do are probably the ultra literary types who believe that Jane Austen’s work is meant to be to be studied , analysed and written about in dry academic terms. They forget that Jane Austen wrote her novels not to impress the literati, the critics or academics of the day, but to entertain herself, her family and friends, who would read and enjoy them together. That she has become one of the foremost English writers of that era and is read and studied by millions today is another matter entirely and should not prevent ordinary readers- including Romantic Night Owls- who enjoy a well told story of romance and intrigue, from declaring a preference.

While, it is a truth universally acknowledged, that Miss Austen’s ironic humour and elegant style are at the heart of her literary appeal, the subjects of her novels are mainly ordinary people— a few families in an average 19th century rural English setting, who, with some exceptions, she may have met in her social round, travelling and staying as she did, from the country parsonage to the more gentrified environment of the houses of her relations and friends in London, Bath and Kent.

As to the plots and themes of her stories, there is no lack of romance and marriage in them, plus the attendant matters of money, character, family relationships, social snobbery and petty intrigue, which provided her with the material for a good story.

In The Pemberley Chronicles, a series of stories following upon Pride and Prejudice, a similar model is used- extending the lives of a small group of families in Georgian and Victorian times; friends and relations, whose lives were woven together through relationships that developed between them.

Inevitably, some encounters lead to romance and others to political or commercial partnerships.

In My Cousin Caroline, the story draws together two minor characters, from Pride and Prejudice: Colonel Fitzwilliam (Mr Darcy’s cousin) and Caroline Gardiner (daughter of Elizabeth’s aunt and uncle). By using clues to the character of the Colonel left by the original author and letting Caroline’s character develop within the context of the Gardiner family, it was possible to weave an interesting romantic relationship, in which the genteel traditions of Darcy and Fitzwilliam combine with the sound, practical middle class values of the Gardiners .

When Caroline and the Colonel fall in love, there is some trepidation because of the differences between them, but their passion and determination overcome such hurdles. Yet, theirs is no self indulgent, callow ardour. Caroline, a romantic young girl at the start of the novel, demonstrates that romance and passion are no barrier to intelligent, practical commonsense. While retaining the warmth and vigour of their partnership, which sustains them through difficult times, both are committed to serve their communities and in so doing, earn the affection and respect of everyone around them.

As one reader (Andrea) wrote recently – “the relationship between this attractive couple is one of the most satisfying in the entire series..... just a great old fashioned romance between two wonderfully developed characters. “

What more could a romantic Night Owl want?

The daughter of Mr. and Mrs. Gardiner, Caroline develops from a pretty young girl into a woman of intelligence and passion, embodying some of Austen's own values. Mr. Darcy, Elizabeth, Jane, Mr. and Mrs. Bennett, and the Wickhams all move through the story as Caroline falls in love, marries, and raises her children. Caroline rejects the role of a compliant Victorian wife and mother, instead becoming a spirited and outspoken advocate of reformist causes in spite of the danger of scandal.

Caroline's advocacy of reform, undaunted by criticism, demonstrates strength in a time when a woman's role was severely restricted.

Rebecca Ann Collins is the pen name of a lady in Australia who loves Jane Austen’s work so much that she has written a series of 10 sequels to Pride and Prejudice, following Austen’s beloved characters, introducing new ones and bringing the characters into a new historical era. Thoroughly researched and beautifully written, this series has been extremely successful in Australia with over 80,000 books sold.