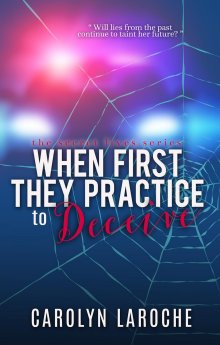 Carolyn LaRoche on Readers Asking for Free Books + Excerpt: When First They Practice To Deceive

Jump into the Secret Lives series. Read an excerpt below.

Just recently there has been a lot of talk on social media about the fact that people still seem to think it’s ok to ask for free books or to complain about how much a book costs. The truth is that it’s a problem that all authors can relate to because it doesn’t matter if you’re self-published or signed with a mainstream publishing house, we’ve all had someone complain that our books are too expensive.

I recently saw a meme that was shared with me that said that you’ll happily pay $5 for a coffee that took two minutes to make and be willing to tip that person, but still complain about paying $1 for a book which took months to make! It got me thinking about how often we spend money on something that’s fleeting – like coffee – without thought of the cost and yet there are things that can last much longer – like books – which seem to be beyond our budgets.

The truth is that the average author spends months writing, editing and polishing a book. If they are self-publishing, they then invest money in an editor, layout artist and great cover design. By the time they are ready to upload this book for sale, the chances are that it has cost them over $1,000 to produce and at $0.99 per sale, they have very little chance of recovering that investment (unless the book takes off, which we all hope for!). It’s vital that readers remember that we don’t get that whole $0.99 from the retailer, we only get varying percentages and if our book was published through a publisher, our initial investment may be dramatically smaller, but our return is shared between all who contributed.

We write because we love it and we love to read reviews from people who have bought and enjoyed our books. In fact, it can be one of our biggest rewards. What we don’t enjoy seeing is posts, comments and even direct emails and messages telling us that we should be willing to give our work away for free. You don’t go to your local grocery store and suggest that, or to a restaurant or a jewelry store, so why should my hard work be given away for nothing?

Books are important and should be valued and it’s been great to see that authors from around the world are uniting to stand up against theft and piracy of our work. I’d love to hear what you think of this situation!

When First They Practice To Deceive - Secret Lives, #3

All Jessy Wallace wants is a happy marriage, but her husband is a liar and in over his head…

Jessy has spent the last decade happily married to her husband, Sam. But when she finally lands a job at Dixie’s Place, a hole-in-the-wall diner, she learns not all is well in paradise. Officer Sam Wallace has been spending the majority of their marriage in the beds of other women. Fed up, Jessy kicks her husband to the curb.

The last thing she wants is another messy relationship…

Uncertain if her husband ever truly loved her, Jessy gets caught completely off guard by the intense attraction she feels for Trey Smith, the night cook at Dixie’s Place. But she recognizes some telltale signs, and discovers he’s an undercover FBI agent. Jessy curses herself for falling for another lawman. To make matters worse, her soon-to-be ex-husband might be involved with Trey’s case.

After the death of his wife, FBI agent Trey Smith has spent the last four years married to his work…

But when Jessy starts waitressing at the diner where he is working undercover, he falls head over heels for her. Her ex-husband, however, is one of the top suspects in Trey’s case, and all Trey wants to do is protect her. He can’t lose this once in a lifetime chance at love.

Jessy is the soon-to-be ex-wife of a suspected criminal.

Can their love overcome the odds, or will it all come crashing down under the weight of lies and deception?

Dixie dumped her packages on the counter with a grunt. “Where the hell is that cook? Trey!”

Trey’s appearance in the dining room was announced by the slam of the back door. His cheeks were red. Jessy caught sight of a cell phone sticking out of his shirt pocket. Trey rubbed his hands together.

“It’s mighty frosty out there tonight. Was just taking out the trash. You need something, Dix?”

“How many times have I told you not to call me that? It sounds too much like dicks.” She swatted at him but Trey sidestepped the hit.

“Aw lighten up, Dix, no one is going to think that of you.” Jessy experienced an annoying twinge of jealousy as Trey ran a long, lazy glance over Dixie’s body, making the woman flush a deep crimson which just made her look sexier. Jessy glanced down at her own, curveless frame and frowned. Life is so unfair.

“Just take this stuff into my office so I can sort it.”

“Sure thing. What’s in all these packages anyway?” Trey flipped open a box lid. “Christmas decorations?”

Trey rummaged around and pulled out an ornament of a tiny ballerina. “Shattered dreams going on the tree this year, Dixie?”

“Gimme that!” Dixie snatched the figure from Trey’s hand.

“Okay, so which one of us is the angel supposed to represent? Knowing all of you like I do, I have to go with the only logical conclusion. Me.”

“Yeah, ‘cause you’re a real angel all right.” Arnetta gave Trey a searing look, like the ones they write about in romance novels.

“You know nothing about my angel status.” Trey returned the angel to the box as he winked at Jessy. “That is a mystery that remains to be discovered. Oh wait, maybe this will help.”

“What is it?” Jessy, intrigued by the contents of the box as much as she was interested in just how much Arnetta knew about Trey’s status, stepped forward. Trey whipped around to face her, his hand on his head.

Only it wasn’t resting on his head. It held a little sprig of green vegetation in his hand and a grin on his face that rivaled that of the Chesire Cat. Mistletoe. Aw, crap.

“Oops, I’m stuck under some mistletoe. You know legend says I have to kiss the person nearest to me.” His eyes burned into Jessy’s skin as her cheeks heated to new proportions never before experienced.

“I don’t think that’s quite how it goes,” Arnetta said.

“Shut up! He’s about to have his meal!” Surrey whispered loudly behind Jessy.

“I think the legend says someone is supposed to kiss you.” Jessy looked into Trey’s  eyes without blinking.

“Legend.Tradition.Whatever. All I know is you are leaving me hanging and potentially exposing both of us to many years of pain and suffering.”

Jessy could feel three sets of female eyes on her, but she only cared about Trey’s. His eyes were so warm and so welcoming, and they were doing things to her insides so she couldn’t think straight.

“Well, I guess we wouldn’t want that.” She rose up slightly on tip toe, closing some of the height gap between them.

“No. I guess not.” He leaned forward, closing just a little more of the distance.

“It’s never a good idea to tempt the fates.” Jessy heard three breaths sucked in as one.

Freezing air wrapped around them as the sounds of laughter and chatter suddenly filled the diner.

“Show’s over, folks. Time to make some money.” Dixie grabbed a few bags and headed to her office.

“Trey! Get the rest of those boxes for me then get in the kitchen!”

Trey stepped back and lowered the mistletoe, never breaking eye contact with Jessy. “Yes, ma’am! I’m right behind you.”

He blew her a little kiss then stepped over to the counter, scooped up the boxes, and was gone before Jessy could remember to breathe.

Surrey was the first to grab up a notepad and take a table, but not before she whispered in Jessy’s ear, “Just like I said. Looks at you like his next meal.”

Other Books in the Series

In the Shadow of the Shield - Secret Lives, #2

Carolyn LaRoche grew up in snow country but fled the cold and ice several years ago. She now lives near the beach with her husband, their two boys, two finicky cats and one old dog. When she is not at the baseball field cheering on big hits and home runs, she is busy teaching science to unwilling teenagers.