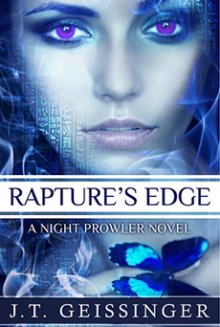 J.T. Geissinger - Rapture's Edge - Who are the Ikati?

Don't miss the Tour Giveaway at the end of the post!

The Ikati are an ancient race of shape-shifters who live in seclusion in small colonies throughout the world. Descended from Cleopatra and once worshipped as gods (the Sphinx was built in their honor), they were driven from their homeland in Egypt when it fell to Rome at the battle of Actium in 31 BC. Bound by primeval bloodlines and a savage code of law, they value secrecy and allegiance above all else.

Though their native form is panther, many have gifts over and above the ability to shift to human form. The strongest can also shift to vapor, and their queen can shift to anything she likes, including the elements, and can take the shape of other people, animals, inanimate objects, even mythological creatures. (Her current favorite incarnation is a white dragon.) In addition, gifts vary by individual, including those of mind control, invisibility, the ability to pass through solid matter, etc.

The Ikati are animals first, humans second. Warriors, bound by tradition, confined to luxurious yet secluded compounds, they maintain an inflexible hierarchy forged through frequent battles for dominance. Men are defined by strength, women by fertility, yet years of isolation have made breeding difficult. New blood is needed, despite mating outside the race being strictly forbidden—and for good reason. Secrecy keeps the Ikati alive.

The Ikati are hunted by the Expurgari (Latin for “purifiers”), God’s soldiers, headed by the pope himself. Recruited from orphanages and with no Earthly attachments, each Expurgari assassin would martyr himself without hesitation to rid the world of what they consider the evil scourge of shifters. In addition to the Expurgari, the Ikati are hounded by a greedy international corporation bent on utilizing their supernatural gifts for profit.

They are gifted, they are hunted, and unless they find a way to increase their numbers, the Ikati are on the verge of extinction. The question is: to what lengths will they go to propagate their race, and return to their former glory? And will mankind allow them to live alongside us, or wipe them out forever?

SECRETS… In the hidden world that exists beside our own, a mirror world of ancient magic and elegant deceptions, a world of people who are so much more than they first appear, a war is brewing. Most of these Gifted people—the Ikati, a savage, sensual race of lethal predators—are content to hide behind human smiles, disguising their splendor in order to survive. But others are discontent. And they will hide no longer.

BETRAYALS… Eliana lives for two things only: vengeance on the man who killed her father and seeing her father’s dream of living in the open with humans come to pass. But that dream is far too dangerous for The Hunt, a group of elite Ikati assassins with one objective: eliminate her before she can expose their secrets to the world.

SEDUCTION… Demetrius is haunted by the memory of the woman he once loved. He will risk everything to save her from the killers on her tail…and convince her, before the ancient walls between two worlds crumble, that only together can they defeat their real enemy, a brilliant, cunning traitor far more deadly than either of them can guess.

In a dark underground cell, Morgan Montgomery waits to die. A member of the Ikati, an ancient tribe of shape-shifters, Morgan stands convicted of treason. And Ikati law clearly spells out her fate: death to all who dare betray.

But there is a glimmer of hope. Thanks to her friendship with Jenna, the new queen of the Ikati, Morgan has one last chance to prove her loyalty. She must discover and infiltrate the headquarters of the Expurgari, the Ikati’s ancient enemy, so they can be destroyed once and for all. The catch? She has only a fortnight to complete her mission and will be accompanied by Xander Luna, the tribe's most feared enforcer. If Morgan fails, her life is forfeit. Because Xander is as lethal as he is loyal, and no one—not even this beautiful, passionate renegade—will distract him from his mission. But as the pair races across Europe into the heart of Italy, the attraction blooming between them becomes undeniable. Suddenly more than justice is at stake: so is love.

Sensual, thrilling, and action-packed, Edge of Oblivion will enthrall readers with nail-biting suspense and heart-pounding passion.

Deep within the primeval forests of southern England, a race of beautiful, savage shape-shifters lives hidden from the everyday world. Bound together by ancient bloodlines and a ruthless code of secrecy that punishes traitors with death, the Ikati send their leader Leander on a mission to capture one raised outside the tribe before she can expose their secret. When Leander tracks the unsuspecting outsider to Southern California, the hardened warrior is prepared for a fight—but not for the effect the sensual young beauty has on his heart.

Jenna spent her childhood in hiding, on the run from someone—or something—her parents refused to discuss. She trusts no one, not since her father’s mysterious disappearance, not since her mother’s sudden death, and definitely not since she began exhibiting strange, superhuman abilities. When handsome, enigmatic Leander appears, promising answers to the mysteries that shroud her past, she knows she shouldn’t trust him either. But their connection is undeniable, and as powerful as the enemy hell-bent on destroying every one of their kind…

J.T. is giving away the following prizes at the end of her tour:

RUNNER-UP: (OPEN INTERNATIONALLY)
Signed copies of all 3 books in the series

Enter the Tour Giveaway via Rafflecopter

J.T. Geissinger's debut novel, Shadow's Edge, was published in 2012 and was a #1 Amazon US and UK bestseller in fantasy romance and romance series. She has been nominated for the prestigious RITA® award from the Romance Writers of America for best paranormal romance for her second book in the Night Prowler series, Edge of Oblivion. A native of Los Angeles, she currently lives there with her husband and one too many cats. Visit her online at jtgeissinger.com