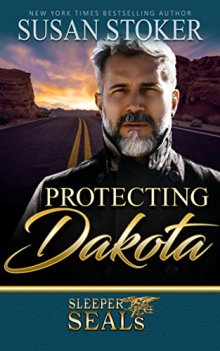 Dakota James's life has become the stuff of nightmares. The leader of the Ansar al-Shari'a terrorist group has become obsessed with her, determined to take her as his wife. On the run, she'll have to pin her hopes on the retired SEAL charged with finding and stopping Aziz Fourati before he can carry out plans to bomb more US airports.

Recently recruited to join a sleeper SEAL team tasked with fighting terrorism on US soil, Slade "Cutter" Cutsinger, with the help of some Special Forces friends, has located the one woman who can identify the deadly Ansar al-Shari'a leader. That was the easy part. Keeping her safe proves more difficult than anyone ever imagined.

When she and her new friend, Caroline, are kidnapped by the terrorist group, Dakota can only pray Cutter and the SEALs will reach them before they're taken out of the country--and away from Cutter forever.

** Protecting Dakota is a part of the SEAL of Protection Series. It is also in the "Sleeper SEAL" connected series. Each book is a stand-alone, with no cliffhanger endings.

Each book in this multi-author branded series is a standalone novel, and the series does not have to be read in order.

The phone next to him rang, and Slade answered. “Cutsinger. How may I help you?”

“I’m looking for Slade Cutsinger. Is this he?”

Slade didn’t recognize the voice, but he definitely recognized the authority behind the words.

“This is retired Navy Commander Greg Lambert. Is this line secure?”

Slade was taken aback. He didn’t remember ever working with a Greg Lambert, and he had a good memory. “No, Sir, it is not. If you need to talk to Commander Hurt, I recommend—”

“It’s you I need,” Greg interrupted. “I’m going to give you a phone number. I expect you to call me tonight from a secure line. I have a proposition for you.”

“No disrespect, Sir, but I don’t know you,” Slade said, having trouble keeping his tone professional. He didn’t mind taking orders, but usually he knew the person who was giving those orders.

“You don’t, but we have a mutual friend who speaks highly of you.”

When he didn’t continue, Slade asked, “A mutual friend?”

Fuckin’ A. Tex. What the hell had the man gotten him into now? “He’s one of the best men I’ve ever met,” Slade told Greg honestly.

“Yeah.” Slade dutifully jotted down the number he was given.

“Needless to say, this is a highly sensitive matter. John assured me that you were discreet and would be extremely interested.”

“At least he’s half right,” Slade mumbled, and ignored the chuckle on the other end of the line. “I’ll call around nineteen hundred, if that’s all right.”

“I’ll be waiting.” And the former commander ended the call without another word.

Slade slowly hung up the phone on his end, lost in thought. He tried to quash the spark of interest that flared deep in his belly, but didn’t quite succeed. Working as a contractor for the US Navy kept his toe dipped into the dangerous waters he used to swim in, but it wasn’t the same. Somehow, he knew that whatever Lambert had to say to him tonight would change his life. Whether or not it was for the better remained to be seen.

to, was Dakota James. Where was she?

New York Times, USA Today, and Wall Street Journal Bestselling Author, Susan Stoker has a heart as big as the state of Texas where she lives, but this all American girl has also spent the last fourteen years living in Missouri, California, Colorado, and Indiana. She's married to a retired Army man who now gets to follow her around the country.

She debuted her first series in 2014 and quickly followed that up with the SEAL of Protection Series, which solidified her love of writing and creating stories readers can get lost in.