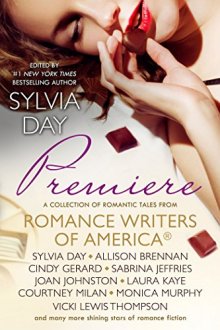 Today we have the honor of introducing you to a collection of romantic tales. This anthology is being published by the Romance Writers of America.

From Romance Writers of America® comes a never-before-published collection of tales that showcases the breadth and complexity of the world's most popular genre of fiction!

New York Times bestselling authors Sabrina Jeffries and Courtney Milan take you on a trip back in time with lush stories of historical romance.

From the first love of Young Adult romance to tales of second chances, LGBT romance to the realms of the supernatural, contemporary to historical, suspense to inspirational, the genre of romance has a story for every reader and this blockbuster inaugural collection from Romance Writers of America showcases it all!

Kate Regnery is joining us to introduce the anthology and showcase a short excerpt from her story.

In this second chances romance, a boy who's loved the girl next door forever gets a chance to prove he's the "one" when they're trapped together on a cross country bus ride.

They slept through the three stops in Kansas, finally waking up when the bus rolled into Kansas City, Missouri, at seven fifteen, for breakfast.

Ford woke up first, his eyes opening slowly against the glare of sunlight streaming in through the tinted window. He was warm. And hard. And the reason was clear.

Clarey Calhoun’s cheek was nestled under his neck, and she was curled into him, her breasts pressed up against his chest. As she breathed deeply in her sleep, they pushed into his chest, then back, into him, then back. He groaned, flicking the blanket off his body with his free hand, then gingerly sliding his other arm from around her body and urging her back gently. She murmured in her sleep, resting her head on his shoulder. He was glad she didn’t wake up. He didn’t want her to see the naked lust on his face. The want. The love.

He forced himself to think of his last football game, the play that had led to the final touchdown, and he felt his body relax. Faking a yawn as she stirred beside him, he smiled as she opened her eyes slowly, blinking twice in surprise as she looked up at him, recognizing him.

“Ford,” she breathed in a drowsy, half-asleep voice, licking her lips and pressing them together.

“Morning, Clarey,” he whispered, his lips a breath away from hers.

She tilted her chin up, just a fraction of an inch, and, closing his eyes, he lowered his lips to hers. It was just a touch, a brush, a grounding gesture, to be sure she was real beside him, to be certain he wasn’t dreaming. He drew back from her, his heart thumping madly and his breath catching as she opened her eyes wide and sat up, pressing her fingers to her mouth.

Katy Regnery, Amazon bestselling author, has always loved telling a good story, and credits her mother with making funny, heartwarming tales come alive throughout her childhood. A lifelong devotee of all romance writing, from Edwardian to present-day, it was just a matter of time before Katy tried her hand at writing a love story of her own.

As it turned out, one love story turned into a series of six Heart of Montana romances, following the love lives of the Yellowstone-based Lindstrom siblings. When Katy’s fans asked her to turn up the heat, she wrote Playing for Love at Deep Haven, a sexy standalone story about second chances. Over the Summer of 2014, Katy was pleased to offer another stand-alone romance, The Vixen and the Vet, which was an Amazon bestseller She also launched The English Brothers, a contemporary romance series about five wealthy brothers looking for love.

Katy lives in the relative wilds of northern Fairfield County, Connecticut, where her writing room looks out at the woods, and her husband, two young children, and two dogs create just enough cheerful chaos to remind her that the very best love stories of all begin at home.

ROMANCE WRITERS OF AMERICA ® (RWA) is a nonprofit association whose mission is to advance the professional interests of career-focused romance writers through networking and advocacy. Founded in 1980, RWA has grown to one of the largest writers associations in the world. RWA represents more than 10,000 members who live in 38 countries. RWA provides programs and services to support the efforts of its members to earn a living from their writing endeavors. If you are interested in becoming a part of this diverse and growing community, visit www.rwa.org for more information.