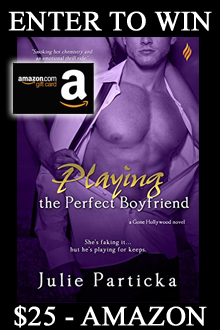 Wild child Jade Easler has never met a dick she didn’t like, but there’s only been one she thought about keeping. And now he’s back in town…right after she’s slept with charming Hollywood up-and-comer, Dean Hartley. The fastest way to get her ex’s attention? Show up on the arm of a sexy younger man. She just hopes Dean is up for the task of fake boyfriend…

When he hooked up with his beautifully curvy photographer, Dean thought he’d only get the one night she promised. But when she needs help convincing a former flame she’s ready to settle down, who is he to argue? He’ll get to show her—in as many ways as possible—that giving up crazy, hot sex for a stale, predictable life isn’t what she wants. And prove that what she needs is him.

Each book in the Gone Hollywood series is a standalone, full-length story that can be enjoyed out of order.

You agree to be added to the NOR Newsletter as well as the Sponsors Newsletter.