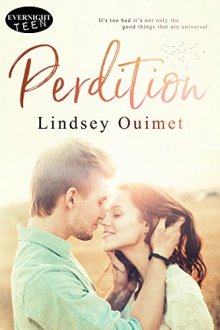 After the death of her stepfather, Michaela Reilly’s family picks up and moves from the bustling city of Miami to a tiny speck of a town in the middle of nowhere Georgia. Starting over is always hard, but when you’re stuck with an emotionally wrecked mother who won’t even look at you and the responsibility of practically raising your younger brother and sister, it’s even more difficult.

Life in a small, rural town is a lot different from what she’s used to. Beaches are replaced with lazy, shaded rivers. Six lane highways with dirt roads. And Levi, the cute preacher’s son, with intentions as pure as his smile, takes the place of a string of shallow, meaningless hookups back home. Some things remain the same no matter where you go, however. Like the way a cute boy can make things seem not so bad, or how when you fall in love—You. Just. Know.

It's too bad it’s not only the good things that are universal. Bad things can follow you, no matter how far away from them you run. Secrets always end up hurting people. A troubled past will come back to haunt you. Michaela has both.

14+ due to sexuality, language, and adult situations

The service ended, and after Pastor Johnson had moved to the exit, people filed out of their rows. The mystery boy four pews up glanced over his shoulder at me as he stood. The sun filtering in through the stained glass windows hit his eyes just right, and I decided right then and there that maybe this place was exactly the kind of distraction I needed.

We waited patiently to join the line of people exiting, my mother nodding and smiling at everyone who offered her a half-hearted, or in some cases over-eager, hello.

Of course, there seemed to be just as many people filing past who were purposely not making eye contact, or side-eyeing the shit out of our family. Like I said, it was hard to tell what you were going to get in the Bible Belt when it came to having a family as … diverse as ours.

An older couple, maybe in their early sixties, glanced over, then looked at each other in a way that had me lifting my chin and taking both my younger siblings’ hands in my own. The woman met my glare and almost stumbled back into her husband’s chest. She shook her head, probably at the less than polite look on my face, and continued on her way.

Filled with an almost righteous sense of indignation, I edged my mother and siblings out into the aisle and toward the exit. If there’d been open space, I would have marched right out that door and straight to the car. I wouldn’t have stopped to say a damn word to anybody. Unfortunately, it looked like Pastor Johnson was taking the time to say a few words of his own to each person as they exited the church. I bit the inside of my cheek to get my temper in check, but the woman from before was up ahead, her head leaned in close to the woman beside her. When they glanced back over their shoulders and lady number two looked pointedly at the spot where Lucas held my hand, I could feel myself turning red. No one had to ask how they felt about us—their faces said it all.

Screw that lady, too.

“Ms. Reilly,” Pastor Johnson’s voice broke through my silent seething, “I’m so glad you and your family could make it today. I hope that you enjoyed the sermon.”

My mother said something back, but I couldn’t tell you what. Three people stood beside Pastor Johnson. I bypassed the preacher completely and didn’t even look at the next two.

I stopped in front of the choir boy who’d caught my eye and let my gaze rake over him. It was part raw attraction and part leftover fury that made my perusal so slow, so thorough, so overtly intimate. I went with it, though, waiting to see his reaction to the way that I dragged my gaze over his wide chest, down to where his torso narrowed, and finally over the front of the light-colored khakis he wore. His pulse jumped in his neck, and his Adam’s apple bobbed as he swallowed harshly.

I took it a step further by staring at his face, cocking my head to the side and lingering just a little on his mouth. I picked up one of my braids and wound the tip around my index finger. He followed the path of it, transfixed by how the dark, glossy strands slipped around the digit as I lowered it back to rest over my chest. I briefly wondered how easy it would be to wrap him around that same finger. My chest felt tight as I watched his expand with air. It looked like we were both having a hard time breathing.

I extended my hand toward him, keeping it a little closer to my body than was strictly necessary.

His palm was big and warm, a nice contrast to my normally cool hands. My thumb brushed over the inside of his wrist and neither of us let go.

“Levi,” he said, his voice low and thick. Deep voices did something for me, and his did not disappoint. “Levi Johnson.”

Johnson. Of course. My gaze flickered to my mother. She was still talking to the preacher, but her eyes were on the two of us. She stared at the spot where my hand was still engulfed in his.

“Levi,” I repeated back to him. I smiled slowly, then wet my bottom lip with my tongue. His fingers tightened around mine, and I leaned closer for a fraction of a second. His wrist barely grazed the side of my rib cage before I let go. “I’ll see you around.”

I didn’t know it then, but after the day I met Levi Johnson, nothing would ever be the same.

I’m Lindsey, an author and enormous fan of young adult literature. I grew up absolutely living for the Accelerated Reader Program at my elementary school, devouring one book after another. Over time, my love of reading morphed into a love of telling stories as well. I’ve been writing ever since.

Born and raised in Georgia, I spend most of my time obsessing over fictional characters (both my own and those created by others), wasting time on the internet, marathoning TV shows via Netflix, and hanging out with my husband and our small army of pets.

To date, my greatest claim to fame is the fact that I once made eye contact with Jordan Catalano... I mean, Jared Leto.