A whole host of authors have come together with Paranormal reads! 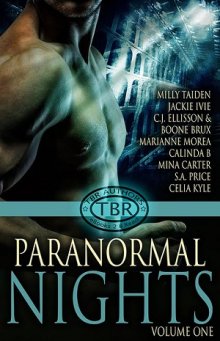 USA Today and New York Times Bestselling authors C.J. Ellisson and Celia Kyle have teamed up with SEVEN more sizzling Bestselling paranormal writers to create a pulse-pounding read like no other! Eight stories. Some of the hottest authors in the industry. One place.

WOLF PROTECTOR by Milly Taiden: A woman with a secret. A man with one desire. A case that pushes them to the edge...

WHY THESE TWO by Jackie Ivie: Reika has found her mate. Darryl Bailes. He's big. Brawny. Black Ops trained. Brutal. And stubborn. He's not interested in being anyone's mate - especially a vampire's. Well. The knives are out. Challenges made. And somebody is going to lose.

*New Release* DEATH TIMES TWO by C.J. Ellisson and Boone Brux: The V V Inn has a ghost problem, one that requires the help of Lisa Carron, resident Alaskan grim reaper. Tasked with helping her, vampire Asa soon realizes that not only can she provide the dead a peaceful passing, but offer him solace in a way no other woman can.

HUNTER'S BLOOD by Marianne Morea: Revenge. It's what Lily Saburi craves since the brutal murder of her best friend. A vigilante bent on striking a blow for humanity against the shadowed world of the supernatural--until she meets Sean Leighton, Alpha of the Brethren. Leighton is charged with destroying anything threatening his pack, and that includes Lily.

*New Release* A WICKED PRELUDE by Calinda B: Chérie Manhattan has sworn off men - until colliding with the sexy, blond, hotter than Hell, Cam Tyson. Her choices: Play it safe Or take a chance on love? Evil demons are heading her way. Will she take the plunge into passion or fall prey to her doom?

DRAGON'S HONOR by Mina Carter: It was supposed to be a simple job. But the Paranormal Protection Agency doesn't do simple...So Shadow-dragons, Baron and Duke, go undercover. As humans. Redcap and troll attacks pale in comparison to the most startling revelation of all: the woman they're protecting is Baron's mate.

PLAYING THE ODDS by S.A. Price: A shadow demon grifter looking for a big score meets a sexy stripper with the ability to grant luck to anyone she deems worthy. She is everything he's ever wanted, and he is everything she's been told to stay away from. But she's the answer to all his problems, and plans to show her that a life with a card player is worth taking a gamble on.

NIBBLED BY THE VAMP by Celia Kyle: Wren Minix knew vamps were real. Totally. But mean fairies? Fairies weren't supposed to be mean! But they are, and she really thought she was gonna become fairy dust if it hadn't been for the super hunky vampire that saved her. And, hey, giving him a little snack in return was no bigs. He helped, after all. Except she wanted one nibble to turn into two and then...oodles.