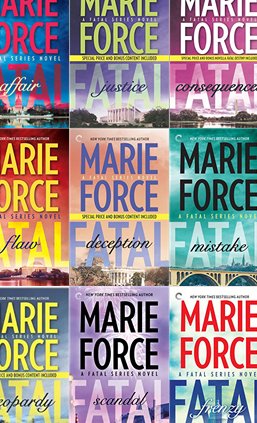 “This incredible milestone is a testament to Marie’s compelling storytelling, her hard work and the loyalty of her fan base,” said Angela James, Editorial Director of Carina Press. “We are thrilled to be able to celebrate this achievement with Marie and look forward to her continued success.”

“It’s really exciting to see The Fatal Series reach this amazing milestone,” said Force. “Sam and Nick have been such a big part of my life for the last seven years, and to know that readers love them as much as I do is very gratifying. I’m looking forward to many more adventures with them.

There are now eight books and two novellas in the series and today, Fatal Deception, is being released for the first-time as a paperback. With stunning commercial packaging in line with competitive bestselling suspense and robust promotional support plans, The Fatal Series print editions are poised for strong success in the retail environment.

Since its inception as the first digital imprint within a traditional publishing house, Carina Press has been an industry leader while publishing a broad range of editorial, including romance, science fiction, steampunk, fantasy, erotica, gay and lesbian romances, mystery, family sagas, horror, thrillers and more—as well as a multitude of subgenres for these categories.

Marie Force, is the New York Times, USA Today and Wall Street Journal bestselling author of more than 40 contemporary romances, including the Fatal Series, the Gansett Island Series and her new erotic Quantum Trilogy, released earlier this year under the name M.S. Force. Sixteen of her books have been New York Times bestsellers, and she recently recorded her 4 millionth career sale. A resident of Rhode Island, Marie has been married to Dan for 23 years and is the mother of a daughter, 19, and a son, 16, as well as two dog children. Find out more about Marie and her books at MarieForce.com.