The Danger of Author Playlists by Sharon Wray, Author of One Dark Wish

Like many authors, I write to music. I’ll even spend hours picking out the perfect playlist for each book in the Deadly Force series. (It’s not procrastination!) Since the books are over 120K words and the stories are told from multiple POVs, I tend to have many songs on multiple playlists.

I love setting up my playlists and choose songs for each type of scene: prologues, love scenes, fight scenes, black moments, etc. And, if I’m lucky, I’ll find the perfect song that encompasses the entire book. When that happens, I can type for hours with that song on repeat. I’ve found songs on iTunes, Spotify, and even YouTube.

For years I believed that the playlists helped my writing. Like a mental cue, when I heard a particular song I’d enter deeply into a scene and write until I’d wrung every bit of emotion out of that moment in the story.

I’ve written over a million words to music and, until recently, believed I couldn’t write any other way.

Then one day, my critique partner mentioned that a particular scene not only slowed the pace of the book but was too sad. I was baffled because pacing is something I take VERY seriously. As an author of long romantic suspense books with National Treasure/Dan Brown-type puzzle plots, I’m very careful with my pacing. Asking someone to read a long book isn’t easy. Asking someone to read a long book with multiple subplots and lots of characters that plods along is impossible! Slow pacing is one of the easiest ways to tank a writing career so I’m always looking for ways to improve the reading experience.

Then my CP mentioned a few other scenes that seemed slower and sadder than normal.

So I took the document, which at that point was over 600 pages, and printed out the scenes she noted.

Because I write long, complicated books, I keep extensive notes on each scene, character transformational arcs, plot arcs, etc. When I studied my notes, I didn’t notice anything unusual. None of the scenes were overly long, they all had two characters instead of ten, and they weren’t sex scenes (yes, sex scenes can slow down a book!)

Since my notes weren’t telling me anything, I took the pages and read them aloud into my phone. Then I listened to the recording. I don’t have a great digital voice, so doing this always makes me cringe. But I do it sometimes if I’ve edited a scene a lot and am worried about over-usage of certain words or concerned about info/back-story dumping.

As I played the recordings, I closed my eyes and put on the song I’d listened to when I wrote that scene. You see, I keep track of the songs I write to in my notes as well. As I listened, I began to hear a pattern. First, I’d written all of the problem scenes to the same song. And… that song was slower and sadder than the other songs on the playlist.

Then I listened to the scenes without the music in the background and discovered my CP was correct. The scenes dragged and they were strangely sad. That’s when I realized that, despite how much I loved the song and how perfect it was for the hero and heroine’s journeys, I’d somehow picked up on the slower pace and sadder lyrics. The music had affected me without my realizing it and my emotions had made their way into the manuscript.

Even though I was relieved to have found the problem, I began to panic. Had I allowed my emotions to be affected by the music so much that my emotions in turn affected my words?

This book was due in two weeks and I began to hyperventilate. I was so worried that the rest of the book was infected. Infected by my wayward emotions conjured by the songs I’d chosen.

I spent those two weeks reading the entire book aloud and comparing it to the music I’d used. Luckily, the rest of the book had been written without my subconscious emotions undermining the story. And I had time to rewrite all of the infected scenes.

Weeks later, when I got my editorial letter, I deliberately edited without any music whatsoever. It felt strange to do that, but I was still worried about infecting the book with my own emotions.

Now that the book I’m talking about (ONE DARK WISH) had been released, I realize that only one song gave me problems. But the experience has made me so nervous about writing to music that I’m hesitant to build playlists for the rest of my books.

I’m also not going to name the problem song because it’s still one of my favorites. And it’s not the song’s fault that I couldn’t disconnect my emotions from my story’s emotions. I just wonder if other writers have had this problem or if it’s one of those many things that writers only talk about in private.

Either way, from now on it’s either silence or classical music in the background. I’m saving the popular music for dancing around the house in yoga pants while I pretend to clean!

Her life must be forfeit for his to be redeemed

Historian Sarah Munro is not used to being shot at, but that's just what happens while she's poking around cemeteries on Georgia's Isle of Grace, searching for the key to a centuries-old cipher. Her quest has unwittingly drawn the attention of two deadly enemies intent on destroying each other—and anyone who gets in their way.

Ex Green Beret Major Nate Walker is on a mission of his own: to restore the honor of his men. To do that, he is required to stop Sarah—or one of his own men will die. Caught in the middle of a deadly rivalry, Nate can't afford to trust the woman standing in his way. But his heart says he can't afford not to...

Sharon is a librarian who once studied dress design in the couture houses of Paris and now writes novels of adventure, suspense and love. She's a wife, mother of twins, caretaker of Donut the One-Eyed Family Dog, and addicted to snapping photos and eating Oreos. 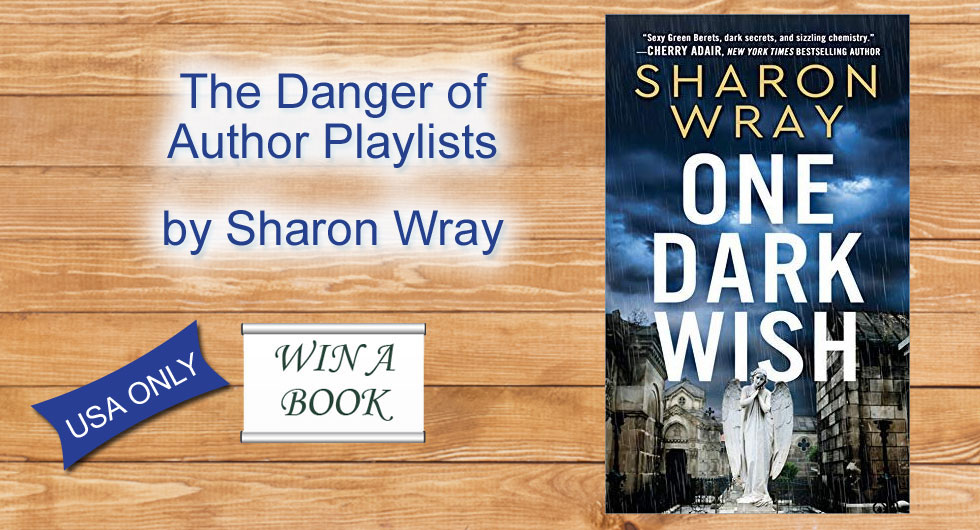