Giveaway: $25 GC - Once Upon a Masquerade by Tamara Hughes

Tamara Hughes stops on over to share her debut with us.

Once Upon a Masquerade 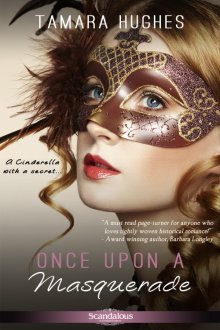 5 Fun Facts About Once Upon a Masquerade

Hi everyone! So glad to be here. My book Once Upon a Masquerade is for sale starting today. So excited I could just spit! But I won’t. Instead, I’ll give you 5 fun facts about the book. Sound good? Let’s go…

1.      The first masquerade party in Once Upon a Masquerade is based on a real event. In March 1883, William and Alva Vanderbilt hosted an enormous masquerade ball to celebrate the completion of their home (or should I say mansion). The guests wore costly and elaborate costumes, from Blue Beard to Little Red Riding Hood, a hornet and a cat. The descriptions of the house are true, along with some of the guests and entertainment.

In fact, many events in this book were taken from history: The opera “LaMascotte” at the Casino theater, the restaurant Delmonico’s, and the discussion of the grand opening of the Brooklyn Bridge, which occurred in May of that year. While some things have been embellished, many of the places and events were very real.

2.      Once Upon a Masquerade is a romance and a murder mystery. In the story, Christopher’s best friend was killed the year before, and the murderer is still at large. Just before he died, David made Christopher promise to protect a woman. But David died before he could give the name of his lady love. Initially, Christopher believes Rebecca is that woman, but he soon begins to suspect she is actually the murderer. And if I’ve done my job right (and I hope I have), you won’t know who the true murderer is until the end.

3.      Be on the lookout for a secondary character in this book that is one you won’t forget. He truly loves society life – the intrigue, the gossip – he loves it all. The costumes he wears will hopefully make you laugh. I know I did. Spencer Henley is a man who can poke fun at \himself, and gets his jollies from annoying Christopher whenever he can.

4.      There are actually three masquerade parties in this book. One occurs in the beginning (the Vanderbilt ball), one toward the middle at Spencer’s country estate in which everyone dresses as Greek gods, and one at the very end. I hope you enjoy all the costumes and fun.

5.      Once Upon a Masquerade competed in the American Title V competition. For anyone who reads the Romantic Times Book Reviews magazine, they periodically hold writing competitions, posting excerpts and having readers vote to see who is eliminated in the contest and who remains. This book was one of the finalists.

And there you have it. Fun facts to keep in mind as you read Once Upon a Masquerade.

Thank you so much for having me here today. I’m having a blast!

About Once Upon a Masquerade

A Prince Charming meets his match…

Self-made shipping magnate Christopher Black first spies Rebecca Bailey at a masquerade ball and is captivated by her refreshing naiveté and sparkling beauty. She’s a stark contrast to the hollow behavior of the ton and the guile of his former fiancée, but the closer he gets to her secrets, the further she pushes him away.

A Cinderella with a secret…

Rebecca is drawn to the charismatic Christopher from the first, but she cannot risk him discovering that she is really a housemaid impersonating an heiress. Her father's life depends on it.

A Happily Ever After that could never be…

When Christopher’s investigation of the murder of his best friend leads him straight to Rebecca, he fears his ingénue may be a femme fatale in disguise. Now he must decide if he can trust the woman he's come to love, or if her secrets will be his downfall.

A small town girl with a big imagination, Tamara Hughes had no idea what to do with her life. After graduating from college, she moved to a big city, started a family and a job, and still struggled to find that creative outlet she craved. An avid reader of romance, she gave writing a try and became hooked on the power of exploring characters, envisioning adventures, and creating worlds. She enjoys stories with interesting twists and heroines who have the grit to surmount any obstacle, all without losing the ability to laugh. To learn more, stop by her website: www.tamarahughes.com. You can also find her on: