Excerpt: Once Upon a Ghost by Erin McCarthy

Erin McCarthy stops on over to share a bit from her cozy mystery ONCE UPON A GHOST.

Once Upon A Ghost - Murder By Design Book 3

With Bailey Burke’s design and staging business booming- it turns out tangling with a serial killer is the best advertising ever- she has no time to lament her lack of love life, or wonder where her dead friend Ryan’s ghost has gone. She hasn’t seen him in months, but when she finds a body in a home she’s been hired to stage she’s hounded by the dead man’s ghost.

Having been a medium before, this guy is by far the most irritating ghost she’s ever met, with his constant need to talk over her and flick pennies at her head. Without Ryan to guide her, she’s on her own to figure out what the dead man needs from her. On top of all that, cop Jake Marner is back in her life, ostensibly to protect her, but mostly to confuse her as to whether they are dating or not.

Before she can say “Put It Where?” Bailey finds herself immersed in mob dealings, the secret world of male-only sweat baths, and double dealings. When another body turns up, there is no doubt that she’s in over her head… again.

I ignored Cezar, even as he started shouting, “Hey! Hey! Hey, lady!” at the top of his lungs. I quickly ended my call with Marner and turned to him, furious and flustered.

“What? Are you a child? You could see I was on the phone. Give me a second!” Just because he was dead didn’t mean he was allowed to thumb his nose at any and all etiquette.

I was pretty sure he had eternity, but unlike him I had manners and wasn’t going to point that out. “What can I do for you, Mr. Wozniak?” Maybe if I were exceptionally polite he would respond in kind.

“I already told you! Find my damn body. It’s not that hard.”

So much for politeness. I accelerated onto the highway, irritated that I had to spend the next forty minutes in the car with this guy. “And I told you, I can’t help you. I’m not a private investigator or a cop. I don’t know anything about your life or the mob or whatever. If you were shot in your house, and they disposed of your body instead of leaving it there, then I wouldn’t even know where to begin. Sorry. Can’t help you.” And to further punctuate my statement, I turned up the radio.

For a minute Cezar didn’t speak and I prayed that he was gone. But when I glanced over I saw that he was actually grinning at me. “Nice, kid. I like the spirit.”

I had no response to that as I glanced in my rearview mirror to merge onto the highway.

“How hard can it be to find a body? I’m not exactly a little guy.”

“If it’s not that hard, someone will find you in the next day or two.” I was sticking to my guns. “I don’t exactly have the authority to drag the lake. I mean, don’t you think that’s the most logical explanation for what happened? They shot you then tipped you right into the lake? Your chair was fifteen feet from the shore.”

But Cezar shook his head. “No way. Too obvious. I’d be floating, so why even bother putting me in the water? Or if they weighted me down, same thing. It would only buy a few days until the gases in my body lifted my corpse to the surface.”

To be honest, Cezar looked like he would be full of gases. “Maybe they took your boat out and dumped you.” He had a dock, though I hadn’t seen a boat in the slip.

USA Today Bestselling author Erin McCarthy has written over sixty novels in romance and YA fiction. In first grade, Erin won a Young Novelist contest with a paranormal romance story about a witch in training who used a spell to enchant her classmate, and she had been hooked on books ever since. A RITA finalist and the winner of the Reluctant Young Reader award from ALA, she is a member of RWA, Horror Writers of America, and Ohioana. Stop by www.erinmccarthy.net for upcoming releases. 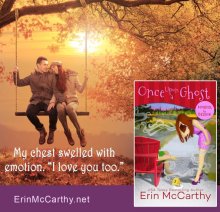