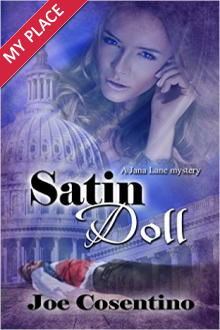 When Night Owl Reviews asked me to write an article about my writing space, I thought about how to get a camera inside my head. I have always been a storyteller. My sister and I as kids produced full scale musicals with lavish costumes inside a neighbor’s garage. It was no surprise to anyone when after college I became an actor in film, television, and theatre, working opposite stars like Bruce Willis, Nathan Lane, Rosie O’Donnell, Holland Taylor, and Jason Robards. It occurred to me that acting is storytelling in the same way that writing is storytelling, so I decided to give writing a try. After writing some plays, I knew my novels would include show business in some way, since show business has always been such a huge part of my life. As an avid mystery reader, it was clear to me that my novels would also be page-turning mysteries with clever plot twists, engaging characters, romance, and lots of clues leading to a surprising conclusion. Since coming from a funny Italian-American family, I also knew humor would play a role in my novels. My home study is the perfect place to write these novels.

I generally leap out of bed at 3am with a new idea then jot some notes down on the pad on my night table. If I can read them the next day I get started. Since I am a college professor/department head by day, I write in the evenings, generally after my spouse has gone to sleep, so the house is quiet. I love my home study. Like Martin Anderson, the theatre department head in my Nicky and Noah comedy mystery series (Drama Queen and Drama Muscle published by Lethe Press), I have a cherry wood mantel fireplace, bookcase, and desk with a comfortable chair and window seat. The teddy bear was a gift from a relative to remind me to write warm and cozy novels. The walls are covered with hand-carved art work, the diplomas for my two master’s degrees, and awards for my novels. Family photos line the fireplace mantel. On my bookshelves are cherished books by my favorite authors like Agatha Christie and Armistead Maupin. Quarts crystals and rocks that I have gathered from trips all over the world sit on the bookcase behind my desk for positive, creative energy. Don’t you love the wall sconces? They are so British mystery! And the fireplace is such a delight on cold evenings as I sit and read my favorite books!

I love reading and writing stories with engaging characters who I want to spend time with. I write a plot summary and biography for each character. Just as I did improvisation as an actor, I let my characters talk to each other. After the first draft, I show the second draft to my spouse for his notes. The third draft goes to the publisher. My mother asked me, “Don’t you have anything better to do than write at night?” I wonder if Shakespeare’s mother asked him that? Hah. Actually it’s a gift to be able to combine my two passions, my writing and my study.

When I need an eye break from writing on my computer, I gaze out the window at the deer or the bench and lamppost. Friends call them, Norman Rockwell views.

From time to time I do author talks/book readings/book signings at Barnes & Noble booksellers, which is always great fun. But it’s always a treat to come back to my private haven, my study. Thank you for letting me share it with you. I hope you have a place in your home that is special to you too. I love hearing from readers. You can contact me at: http://www.JoeCosentino.weebly.com

Murder, corruption, and scandals rock Washington, D.C.... America’s most famous ex-child star, Jana Lane, is playing a US Senator in a 1983 film. Just as she and her family arrive in DC, two Washington power players are murdered, and Jana is caught in the web of intrigue and political scandal. Jana falls under the spell of the breathtakingly handsome detective assigned to the case, ex-professional football player and food aficionado, Chris Bove. Will Jana and Bove uncover the murderer’s identity and shocking secrets before Jana and her family become the Capitol’s next victims?

An excerpt from SATIN DOLL, a Jana Lane mystery, by Joe Cosentino, published by The Wild Rose Press

Jana felt goosebumps as she looked over at the dias for the presiding officer—a rotating senator elected by the majority/Republican party. Her eyes spanned the one hundred desks in a semicircle, where senators sat by order of seniority with the majority leader (Josiah Maxmillion noticeably absent) and minority leader (Ben Stevens present) sitting front and center on each side.

The meeting resumed. Jana stood in awe and listened as senators took to the floor, yielding and accepting time to and from one another, making their case for or against the vast expense of taxpayers’ dollars.

After ten minutes had gone by, Jana realized she had left her notepad in Cassie’s office. Wanting to write copious notes about her meeting with Max and about the senate debate, Jana hurried through hallways and around corridors. Again flashbacks from her nightmare rendered her unable to move, but she commanded her legs to obey and miraculously found her way back.

Upon entering Cassie’s office, Jana noticed Cassie’s secretary and Lenore were not at their desks. Probably on their lunch breaks. Since Cassie’s office door was open, Jana peeked her head inside and gasped at the sight of Tamaya Stormcloud, lying motionless on the Persian rug, surrounded by a pool of blood.

OTHER TITLES IN THE SERIES

Giveaway: Post a comment about your private sanctuary. The one that entices us the most will win an e-book copy of PAPER DOLL, the first Jana Lane mystery, from the author Joe Cosentino.

“Porcelain Doll is Joe Cosentino at his finest. We are drawn back to the fashions and attitudes of the 1980's in a character-driven story full of intrigue and passion." Kirsty Vizard, Divine Magazine

“Beautifully written and intensely detailed, Porcelain Doll is one not to be missed. Flirtatiously decadent with a strong moral undertone, set in a decade of extraordinary social change this is a story of its period that is as poignant today as it was then. Joe Cosentino controlled the emotions that the book encouraged with a deft but delicate touch. Suspenseful and mysterious, Porcelain Doll is a masterful creation, one that was impossible not to be affected by.” Carol Fenton, BooksLaidBare Reviews

“Murder, mystery, and suspense are high inside of this brilliant masterpiece by Joe Cosentino.” “Every page fills the readers with intrigue.” “Edge of your seat mystery that lures readers instantly.” “Once you read it, you can't put it down.” Danielle Urban Universal Creativity Inc.

“Paper Doll is a superbly crafted mystery with an eclectic cast of characters that will engage you and elicit some very emotional responses as you are completely caught up in the events that unfold in these pages. Everyone has secrets and the people in Paper Doll have them in spades!” Fresh Fiction

“If you like novels that are filled with new and old Hollywood, and a range of sub-plots, you are going to love this!” Saguaro Moon Reviews

“I liked that there was enough evidence for each of the suspects to keep me guessing until the very end.” Molly Lolly Reviews

“Joe Cosentino knows how to keep his readers’ interest with every page.” Universal Creativity Digital Magazine

"Mr. Cosentino has produced a masterpiece of mystery" "The story gripped me from the start and there were enough twists and turns, with a bit of romance thrown in for good measure, to keep hold of me until the end of the book." "Great book, can’t wait for book 2." Readers’ Favorite