Mistress of Pleasure is finally here! Purchase a lesson...if you dare. 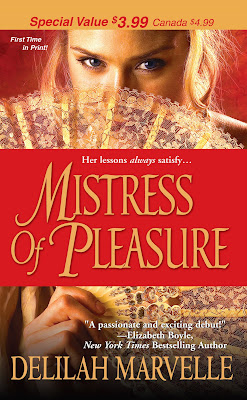 Today is a very exciting day for me!!! Why? Because my first book, MISTRESS OF PLEASURE, officially hits stores today. (Gleefully clapping hands here). It took me almost 11 years, over forty manuscripts and over two hundreds rejection letters (one of those rejections coming from my own editor, LOL) to get to where I finally am. And instead of the usual throwing of pitches and excerpts and what not (though you can find those on my website www.DelilahMarvelle.com, LOL), I decided to pull together little fun vignettes that centers on sex and love throughout history. Enjoy!
Cheers,
Delilah Marvelle

THE HISTORY OF THE BED
As much as we know about history, the origins of the first bed are somewhat muddled. There is not one particular person, tribe or country that can raise their hand and lay claim to it. But one thing is very clear. Every country throughout history had a different approach to its philosophy. The Persians, for instance, had an obsession with cushions. So much so that the bed itself needed to be placed upon a cushion. The Greeks and Romans, were obsessed with coverings and height. Some beds were so insanely elevated that steps were needed to climb to the top. Think of a bunk bed. On steroids. To my utter disappointment, the British were prudes when it came to the bed. They believed in functionality and did not deem it proper to associate it with “you know what.” You were born on it and you died on it. Nothing more. The French and Italians, however, decorated the bloody hell out of their beds, making it quite impossible for anyone to think the bed was used for anything BUT improper dalliances. So while the Brits had one solid bed that they passed on from generation to generation, Henry Harvard's Dictionary of French beds (1887-1890) describes 69 different types of beds. Though perhaps not too surprising when the rulers of France themselves garnered quite the collection. Louis XIV, for example, had a total of 413 between all his palaces. And I'm certain he used every single one. Wink, wink.

THE HISTORY OF THE STRIP TEASE
The idea which had originally created the striptease was not meant to be a form of legal prostitution, but to allow the men in the audience an erotic, entertaining and artistic fantasy which afterward would allow the men to return home to their wives with their “morals” in tact. So when exactly did it all begin? There seems to be no definitive answer to this, but most history points toward the theatrical venue known as the burlesque. Which means the term striptease and burlesque became fused together during the 1920's. And though we think of can-can girls and so on when it comes to the history of burlesque, you'll be surprised to find that the origination of the striptease itself is rather an American product coming from popular theatre in the 1860's. Americans still wanted to keep the idea of a woman contained. After all, if an ankle could cause a man to hand over his horse and carriage, the thigh could only cause him to hand over the house and children. Heaven forbid! So all sorts of tricks were devised to draw men into watching these "burlesque" shows under the guise of "entertainment." Things such as full body stockings known as "fleshlings" started making appearances. Simply think of over sized pantyhose pulled over the length of a corseted body that came in shocking colors of flesh or white. All giving the illusion that the man was watching nude women prance about the stage when in fact they were very well clothed. Fleshlings were eventually tossed and the rest as they say is history.

THE TEMPLE OF...SEXUAL DOOM?
Indiana Jones would have had QUITE the erotic adventure if he had decided to treasure hunt in the Babylonian temple known as the temple of Mylitta. Mylitta was a very fascinating Babylonian version of Aphrodite. There were many rules and laws surrounding the worship of Mylitta. By law, Mylitta, the goddess of love, wanted every woman in the kingdom of Babylon to go into her temple once in her lifetime for a specific purpose. To prostitute herself once in her lifetime. I give you a version of Herodotus that best explains (mind you I intend to comment between these texts...how can I resist!): "Many women, proud of their great wealth and desirous of keeping themselves apart from the vulgar (even though they were about to become vulgar themselves...ehm) traveled in a closed and covered carriage (so that the men on the street wouldn't come running to flip up their togas the moment Lady X drove up to make her sexual sacrifice). She was followed by a number of maidservants into the temple. (Though maids they were not for long...). When a woman became seated she could not return home (can you imagine?!) until one of the men (milling about the temple looking for a good frig) threw down a gold piece into her lap and said, "I demand you in the name of Mylitta.'" The woman would then have no choice but to follow the stranger outside the temple and have intercourse with the man. Sadly, this was expected from every woman once in her lifetime be she married or not, be she old or not, be she sick or not. Mylitta would be waiting. As would all the men...


THE FROG PRINCE TALE
You all remember the Frog Prince Tale, yes? Of course you do. The Princess happens upon a slimy, little frog when she loses her golden ball in a pond. She asks for help in retrieving it, but alas, the frog refuses to cooperate unless she kisses him. The Princess is naturally disgusted but a golden ball is worth a lot of money. So she compromises herself in the name of said golden ball and kisses him. Lo and behold! He turns into a gorgeous prince. The story itself was told to show the power of a kiss. That a kiss can cause one to close their eyes and when it is over and the eyes are re-opened, an emotional connection occurs. She wanted a prince, so she got one. At least that is how it's supposed to work. Now what is fascinating about the Frog Prince Tale is that the story actually holds a measure of truth. A frog CAN turn into a prince. How? Did you know that certain frogs like the Bufo Marinus secrete a toxin to ward off predators? And when licked (or kissed in this case) is causes visual and auditory hallucinations. So the prince didn't actually exist for the poor girl. But the frog did!! I suppose all that matters is that she lived happily-ever-after...