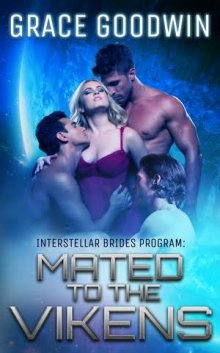 Mated to the Vikens by Grace Goodwin Excerpt

As an art dealer in New York, Sophia Antonelli's worked hard to build her business, but fate forces her to make a deal with organized crime. When things go wrong, she takes the fall and is offered a choice: twenty-five years in jail or the Interstellar Bride Program. The choice is easy and Sophia is shocked to learn she's mated to not one, but three Viken warriors.

After ten years fighting the Hive, Gunnar, Erik and Rolf are now the Kings' guards at Viken United. Bowing to the new Queen's wishes, they agree to share an Interstellar Bride. It should be an easy task since she's matched to three of them, all battle hardened warriors. But none can save her from being kidnapped during transport.

Accidentally mixed up in an evil organization's plot to assassinate the Viken Queen, Sophia refuses to back down, even with her mates standing protectively in the way. After her experience on Earth, she's not about to let anyone ruin her new life. Sophia will risk everything to expose her enemy, but when it comes to their new bride, her three Viken mates will do whatever it takes to eliminate the threat and keep her...forever.

She did some more finger swiping, then stilled. “Interesting.”

I began to shake, a thousand butterflies dancing in my stomach. I was not getting back onto the prison bus, shackled and forced into a horrible orange jumpsuit. I couldn’t do it.

She looked at me again, offered a brilliant smile. “It seems that you have been matched to three Viken warriors.”

“Three?” Holy crap. Three? What the hell was I supposed to do with three men?

She nodded. “Your match is lower than usual because you have three mates. I think eighty-five percent is quite remarkable for three.” She cocked her head to the side as she studied me. “You do not seem surprised. I assumed you would be shocked.”

“The dream,” I replied. I didn’t say more, for I was not going to recount how I was fucked by one man while I stroked two others off.

“There were three men in your simulation? Interesting. The last Earth woman matched to Viken was matched to three men as well, however they are triplets and genetically identical. Perhaps you experienced their mating ritual.”

“Are you telling me that was real?” Holy shit. I wanted to experience that for real. If I was going to have three men touching me like that, I didn’t mind going to Viken at all. In fact, I was ready.

“Yes. The experience was real, but someone else’s recorded neural experience. A different couple. Or…um, foursome. Out of all the simulations that flitted across your brain as part of the testing, this one was your match.”

My nipples hardened in agreement at the memory. Yes, that was definitely a match.

“There is a note here.” Her brow furrowed as she read. Finished, she lifted her gaze to me. “This makes sense now. It appears Viken has instituted a brand new mating protocol for the Interstellar Bride Program. Since their Queen came through the program, and her match to the triplets was so successful in uniting their planet, it has been decreed that other Viken males from the three different sectors now share a mate as well.” She waved her hand in the air. “I’m sure they will explain everything once you arrive.”

“You’re right. There is one last question. Do you accept the results of the testing?”

“Sophia Antonelli, you are no longer a citizen of Earth, but of Viken. Good luck.”