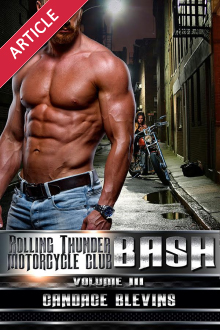 Thanks so much for having me today, and helping me celebrate the release of the final volume of the Bash trilogy.

Werewolf bikers. There are lots of jokes we can come up with, right? In the first book of the Rolling Thunder Motorcycle Club series, when Gen first finds out Duke is a werewolf, she pops off with kind of a smart-assed question:

I don’t think anyone else would’ve had the nerve to ask any of my bikers this — only someone they’re in love with would likely get away with it as a joke.

For those who may not be familiar with my paranormal universe, there are three different species of vampire, and just about every kind of shifter imaginable – lions, bears, eagles, owls, rabbits, horses, swans, dragons… and of course, wolves.

Most of the wolves are in the Pack, but joining the Pack involves all kinds of metaphysical ties, and it means the Alpha can take over your willpower in extreme circumstances. Not all wolves are comfortable with this, but being a lone wolf can be hard, too.

So along come my biker werewolves. It gives them the brotherhood of the Pack, but lets them elect a president and then vote as a club on the big stuff. No one can take over their willpower. They’re each their own man — and wolf.

A few things set the Rolling Thunder Motorcycle Club members apart from other bikers, the most obvious being the lack of tattoos. When a shifter changes, he arrives in perfect genetic form, with his self-image helping to form things like hair and beard length. If he’d been tattooed for years before being bitten, he might keep them. Same with scars. However, if someone who’s already a wolf tried to get a tattoo, he’d lose it the first time he shifted.

But according to my readers, the most fun thing about the shifters in my universe is how the strongest of them can alter their body parts. We’ll start with their tongue — it has to stay the same basic mass, but they can make it longer and narrower and still have total control over it. But it isn’t just oral sex they excel at — other appendages can also be made either short and fat, or long and thin. This can come in super-handy when breaking in an anal virgin, or when the woman has some more experience and he wants to be sure she knows she’s been claimed by a wolf.

Which brings us to the whole claiming thing. Wolves are territorial, loyal, and fierce.

Bash is an anti-hero, so when he says, “whatever it takes,” he doesn’t say so lightly. He’s killed for her before — it won’t bother him to do it again. But he also understands it’s going to take more than that to keep her. In wolf form, he catches bunnies for her. In human form, he buys an ice cream maker and surprises her with her favorite ice cream flavor.

The final thing I want to say about all of my werewolves has to do with loyalty. Every one of them plays on a very large playing field while they’re single. Women come and go, and the men often never bother to even ask for a name. However, once he finds someone who’s his, and once he’s claimed her? He’s loyal. I know a lot of MC books deal with cheating, at times, but that’s never going to be an issue with a werewolf.

Thanks again for having me today! If readers want to find out more about the series in my paranormal universe, they can go to http://www.candaceblevins.com/kirsten-osheas-universe/ .

Will Angelica save herself, or will she have to be saved? Either way, knowing what Bud and Bash are capable of, do we want to know the repercussions?

Follow Bash, Angelica, and the rest of the MC for the exciting conclusion.

This is the final installment of a three book story, with a happy ending and no cliffhangers.

Kayla met me in the bathroom after last period, and watched as I changed out of my super tiny mini-skirt into jeans. God, if my dad saw me in this skirt he’d have an aneurism.

“I can’t believe you lost Brain. God, Ang, he’s the best biker-bitch you’ve had yet.”

Speaking of aneurisms, my dad nearly had one when he found out Kayla called me Ang. He calls me Angel, but says no one else is allowed to shorten my name. One of the reasons I love Kayla is she isn’t afraid of my dad, or any of the other bikers, and she just kept calling me what she wanted.

I shrugged as I buttoned my jeans and stowed the skirt in my backpack. “I got one of the new guys, I’ve only met him a couple of times. He looks like he’s pissed at the world, and I seriously doubt he’s going to be any fucking help at all with my calculus or chemistry homework.”

“He have a cool name?” she asked as we left the bathroom.

“Bash, and best I can tell, it isn’t ‘cause he’s bashful. And damn, the boy is beautiful.” And he’d be so fucking pissed if he knew I’d called him a boy.

“How you gonna break him in?”

I shook my head. “Haven’t decided. He’s actually kinda scary, even for one of my dad’s men. Also, I don’t think he’s that much older than us. I know when he first came, he couldn’t have even the prospect patch yet, ’cause he wasn’t old enough. They treated him like one, which had to suck, but he didn’t get his first patch until a few weeks ago, so I think he just turned eighteen.”

“You know his story?”

I shook my head. “He has a fucked up accent though. He isn’t from around here.”

Kayla showed the assistant principal the note from her mom saying she could ride home with me, and he waved us to the RTMC vehicle waiting in the car line.

I got into the front passenger seat and settled my backpack at my feet as I put my seatbelt on and told him, “Bash, meet Kayla. She’s my BFF and you’re her ride now, too. Not just mine.”

He breathed deep, and I assumed he’d just realized she’s human and not wolf, and I added, “We have a problem, you take care of her first, then me. I can handle myself a few minutes, but she isn’t a fighter. Get me?”

He pulled forward and glanced in his rear view mirror at Kayla before looking forward again. “My orders are to keep you safe, Princess.”

I sighed and leaned my head back, looking at the road instead of him. “Those are your orders from my dad. Thing is, I can make your life a living hell if I want, or I can help make this a cushy assignment until you get your patch. I’ve grown up in the club, I know the drill. When Kayla and I became best friends in the fourth grade, our dads had a talk. Their agreement was she’d come to the house, but never to the club, and there’d be no parties at our house when she’s over. She hasn’t been around ya’ll much at all. Her parents have met my prospect chauffeurs over the years, and they’re mostly chilled about it now, but they’ll need to meet you sometime this week.”

“Basically,” Kayla said from the backseat, “you’re our bitch now. You’re our ride when we need one, and you go get stuff we need, even if it’s tampons at two in the morning. You’ll carry our packages for us when we go shopping at the mall, and if we ask if our ass looks fat when we try on clothes, you’ll be honest and tell it to us straight from a guy’s perspective.”

“And not,” I added, my voice low and deep, “from my father’s viewpoint.” I held my wolf in, so I didn’t growl at him in front of Kayla. “I know you’re supposed to cock-block us, but I also know you can’t actually hurt any of the guys.” He held his hand up, thinking he could silence me, and I said, “Fuck you, asshole. I’ll talk when I fuckin’ want to.”

Candace Blevins is a southern girl who loves to travel the world. She lives with her husband of 17 years and their two daughters. When not working or driving kids all over the place she can be found reading, writing, meditating, or swimming.

Her urban fantasy series, Only Human, gives us a world where weredragons, werewolves, werelions, three different species of vampires, as well as a variety of other mythological beings exist.

Candace's two paranormal romance series, The Chattanooga Supernaturals and The Rolling Thunder Motorcycle Club, are both sister series to the Only Human series, and gives some kick-ass secondary characters their happily ever after.