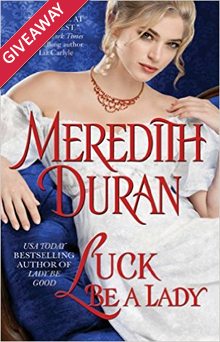 When I read the blurb for Luck Be a Lady I was drawn into the idea of the hero being a Crime Lord. So I asked the author to give us some insight into Nicholas O'Shea. What makes him tick...

“Is it any of your concern what I do, or whom I wait for?” Catherine asked.

“Your streets?” She lifted her brows. “Has Her Majesty been informed of your claim?”

“Oh, I reckon Her Majesty would be glad to cede this piece of London,” O’Shea said amiably. “Certainly she’s never bothered to worry for it.”

As a boy, Nicholas O’Shea never knew when the next meal was coming, whether he’d have a roof to sleep beneath, or if he’d even make it to tomorrow. Born in a time and place where the Irish were considered third-class citizens, he has fought his way out of poverty, and now rules London’s East End. His reign is iron-firm but always fair; he looks after the people who live in Whitechapel because nobody else is going to do it. As for the rest of England, the powerbrokers of Parliament and the aristocrats of the West End and even Her Majesty—he has no care for those who never had a care for him and his.

Here was what made the toffs such easy pickings. They imagined, because they’d designed the game, that nobody else could learn the rules.

Nick has risen in the world; he’s a proper landlord these days, his business ventures mostly legal. But he got his start in petty crime, and he’ll never forget his roots. His grand gambling palace still flouts the law, but his bribes guarantee that the police and politicians turn a blind eye to it. Their willingness to do so proves what Nick always suspected: the law is a sham, built to profit the wealthy while keeping the poor in their place.

“I’m no nob,” Nick said softly. “Your rules don’t apply to me. And your blood won’t look blue when I spill it. Ask me how I know.”

Every man, woman, and child in the East End is under Nick’s protection. He will fight for them, because there is no one else to do so. And he is fearless in protecting what’s his.

“I want the freedom to live as I please,” he said softly. “By my own rules, nobody else’s. How does that sound to you?”

Catherine Everleigh has agreed to a marriage of convenience with Nick. But the moment she signs that marriage contract, she becomes one of his, whether she knows it or not. And while she may not see the prison she’s made of her own life, Nick is an expert at breaking out of prisons—and he won’t let Catherine stay in one. He means to give her a taste of freedom, in his bed and out of it…because he sees beneath her cold reserve to a deeper truth: this is the woman he’s been awaiting his whole life.

Romance sizzles between a famous heiress and an infamous crime lord in this fourth sexy novel in the Rules for the Reckless series from the USA TODAY bestselling author of Fool Me Twice.

They call her the “Ice Queen.” Catherine Everleigh is London’s loveliest heiress, but a bitter lesson in heartbreak has taught her to keep to herself. All she wants is her birthright—the auction house that was stolen from her. To win this war, she’ll need a powerful ally. Who better than infamous and merciless crime lord Nicholas O’Shea? A marriage of convenience will no doubt serve them both.

Having conquered the city’s underworld, Nick seeks a new challenge. Marrying Catherine will give him the appearance of legitimacy—and access to her world of the law-abiding elite. No one needs to know he’s coveted Catherine for a year now—their arrangement is strictly business, free from the troubling weaknesses of love. Seduction, however, is a different matter—an enticing game he means to ensure she enjoys, whether she wishes to or not...

That Scandalous Summer - Rules for the Reckless, #1

Fool Me Twice - Rules for the Reckless, #2

Lady Be Good - Rules for the Reckless, #3

MEREDITH DURAN blames Anne Boleyn for sparking her lifelong obsession with British history. When not writing, she spends her free time collecting old etiquette manuals, guidebooks to nineteenth-century London, and travelogues by intrepid Victorian women. She is the author of ten novels, all published by Pocket Books. Her debut, The Duke of Shadows, has been translated into thirteen languages and was the winner of the Gather.com First Chapters Romance Writing Competition. The Duke of Shadows and her second novel, Bound by Your Touch, were ranked among the top 100 romances of all time in the 2010 All About Romance poll. Her other books include RITA-nominated Fool Me Twice; Wicked Becomes You, which was a Romantic Times Top Pick and was included on Woman's World list of Best Beach Reads for Summer 2010; and her newest releases, Lady Be Good and Luck Be a Lady, both Top Picks (4.5 stars) from Romantic Times.