Michelle M. Pillow fan girl her and I'm thrilled so see a new release from her. Michelle is realeasing a paranormal warlock romance! Warlocks of my! 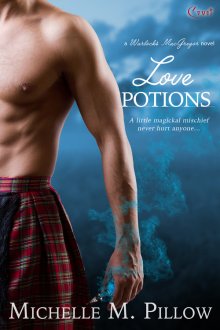 Erik MacGregor, from a clan of ancient Scottish warlocks, isn’t looking for love. After centuries, it’s not even a consideration…until he moves in next door to Lydia Barratt. It’s clear that the shy beauty wants nothing to do with him, but he’s drawn to her nonetheless and determined to win her over.

Lydia Barratt just wants to be left alone to grow flowers and make lotions in her old Victorian home. The last thing she needs is a demanding Scottish man meddling in her private life. Just because he’s gorgeous and totally rocks a kilt doesn’t mean she’s going to fall for his seductive manner.

But Erik won’t give up and just as Lydia let’s her guard down, his sister decides to get involved. Her little love potion prank goes terribly wrong, making Lydia the target of his sudden embarrassingly obsessive behavior. They’ll have to find a way to pull Erik out of the spell fast when it becomes clear that Lydia has more than a lovesick warlock to worry about.  Evil lurks within the shadows and it plans to use Lydia, alive or dead, to take out Erik and his clan for good.

Erik reached between them, grabbing the shifter as they came to the bottom of the hill. The car slowed to a stop. He looked over at her and confidently winked. She quickly turned away, focusing on the two thick white stripes painted down the center of the dark blue hood.

When the car started to move, she glanced back at him from the corner of her eyes. Erik rested his hand on his bare knee. Lydia took a deep breath. She could definitely say this was the first date she’d been on where the man was wearing a skirt.

Kilt, she corrected herself. It’s not a skirt, it’s a kilt.

And it was damned sexy on him.

On top he wore a basic white shirt, a black five button waistcoat, matching argyll jacket and a lighter wool tie. A black leather bag with silver studs wrapped his hips. Below the waist, the red and green plaid pattern fell to just above his bare knees. About three inches below the hem, longer kilt hose covered his calves.

“Huh?” Lydia pried her eyes away from his waist, horrified to discover that she’d been staring at the man’s crotch again. Almost defensively, she said, “I wasn’t wondering what you wore under your kilt.”

“Ah, well that would be nothing at all, lassie,” Erik said, again winking at her, “but I was telling ya that the black bag you’re looking at is called a sporran.”

“Oh,” Lydia turned to the window, rolling her eyes as she mocked herself.

Great going, Lydia! Way to make him think you’re not a sex crazed whore. Wait. Did he just say he was naked under the kilt?

She peeked at him, trying to determine if he was teasing her or not.

Oh, great. It’s bad enough I can’t think straight around him, now he has to tell me he’s not wearing any underwear.

Was it too late to fake an illness and back out? Probably.

How about jumping out of the car to run home screaming?

“So, do you wear your kilt often?” Lydia instantly wanted to die.

As long as she can remember, Michelle has had a strange fascination with anything supernatural and sci-fi. After discovering historical romance novels, it was only natural that the supernatural and love/romance elements should someday meet in her wonderland of a brain. She's glad they did for their children have been pouring onto the computer screen ever since.

Michelle loves to travel and try new things, whether it's a paranormal investigation of an old Vaudeville Theatre or climbing Mayan temples in Belize. She's addicted to movies and used to drive her mother crazy while quoting random scenes with her brother. Though it has yet to happen, her dream is to be in a horror movie as 1. A zombie or 2. The expendable screaming chick who gets it in the beginning credits. But for the most part she can be found writing in her office with a cup of coffee in pajama pants.