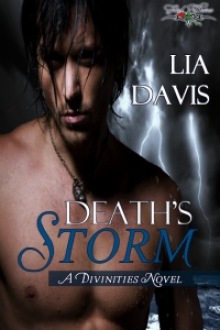 Lia Davis on When Worlds Collide

Comment to win an eBook of Forgotten Visions, The Divinities book1, and a swag pack! Ends - 2/8/2013

I love it when two strong people come together. Tension rises and they are forced to come to some kind of compromise.

The heroine from Death’s Storm, Khloe, plays by her own rules. She is free spirited and not afraid to express herself. She’s also independent, and a past relationship gone wrong had taught her not to trust anyone of the male species. And she doesn’t like demons.

The hero, Jagger, is one of the few death demons still in existence and he was charged with the protection of the Divinities. He’s alpha all the way: strong, possessive, compassionate, and knows what he wants and how to get it. Jagger has never backed down from a challenge, and Khloe is no different.

When these two meet, sparks fly and passion is ignited. Khloe is throw off by it and isn’t sure what to do with her new demon guardian. At first she’s annoyed with him and herself for being attracted to him. But when the demons they are at war with change their game plan, she has to learn to trust Jagger and work with him.

This couple was so fun to write, and I love to be able to work with them as sub-characters in the future stories in the series.

What is your favorite alpha couple, and why?

Technical genius and demi-goddess--aka Divinity--Khloe Bradenton relies on no one for help, and she definitely doesn’t need comfort from anyone other than her twin. After her parents died by the demons’ hands over two years ago, she has graciously stepped up to her place in the war between demons and witches. When a creature far more dangerous than the ones responsible for killing her parents claims he is her guardian, she is torn between her desires for the dark predator and the painful loss she has endured at the hands of her enemies.

One of the last death demons still in existence, Jagger has pledged his life to the Goddess Hecate. Charged with the guardianship over the Divinities, he is never to approach them, but to aid them from a distance. When the firestorm, Khloe, sacrifices herself to save her twin and best friend and becomes the prey, he has no choice but to reveal himself to her. He is taken by surprise when the need to claim her as his own emerges. A desire he has never felt before could be more dangerous than the demons out to destroy them.

Her foot caught on something, and she went down. Twisting to the side to keep from landing face first in the dirt, she fell on her left knee and hip as she hit the ground. She hissed as pain shot through her knee up to her hip.

Almost instantly, the demon appeared, standing over her. He was huge and gorgeous, peering down at her with a not-so-pleasant expression. Fear churned in her belly, and she scooted backward on her bottom away from him. She picked up a handful of dirt and threw it at him. When she tried to stand, her knee hurt so bad she cried out and fell back down on her ass. Now you’ve done it.

He knelt down in front of her. “I will not harm you.”

Want some candy, little girl? She cringed and began crab-crawling. He stood. She took the opportunity to try to stand again. Relieved when she made it to her feet, she hobbled off in the opposite direction from where he stood watching her. Suddenly, he appeared in front of her again. She let out a squeak and took a hop backward on her good leg.

It was bad enough that her arm was still bleeding and hurt like hell. Now, her knee started to swell. To top it off, she was powerless. How did humans do it? Right, they were born without magic.

And, they didn’t have demons chasing them.

A rustle of leaves to her left sent a wave of panic through her body. Why couldn’t this be the day they took Teddy-Bear to the vet? At least with the hell hounds, she’d have a chance against the determined demons chasing her.

A rumble, followed by a flash of lightning in the sky, made her flinch. “Shit.” She breathed out. A snap of a twig followed by a dark power gliding over her skin gave her chills. Something large was coming.

“You’re better off with me.” The husky voice was too close for her comfort.

“What is it?” she whispered, looking back at the sound of footsteps growing closer.

“Demons.” She looked up at his face. He sniffed the air. “Three Regals.” He reached out and grabbed her left bicep. She groaned in pain. He frowned and roughly turned her arm over. “It’s not healing,” he stated.

“You think?” Khloe pulled her arm from his grip, limping around him. At least she was able to walk on her knee, although, she wasn’t sure for how long, and. running was not an option. “What do we do?” She held up her wrist with the cuff around it. “No magic.” She couldn’t face Regals without her magic. She was as good as dead.

He held out his hand, palm up. “You can trust me, Khloe.”

She looked into his chocolate-brown eyes for several moments. Tiny rivers of red flowed and twisted around the pupils. Could she trust a demon who looked so damn good?

Lia Davis is a mother to two young adults and two very special kitties, a wife to her soul mate, a paranormal romance author, graphic designer, and co-owner to Fated Desires Publishing, LLC. She and her family live in Northeast Florida battling hurricanes and very humid summers. But it's her home and she loves it!

An accounting major, Lia has always been a dreamer with a very activity imagination. The wheels in her head never stop. She ventured into the world of writing and publishing in 2008 and loves it more than she imagined. Writing and designing are stress relievers that allow her to go off in her corner of the house and enter into another world that she created, leaving real life where it belongs.

Her favorite things are spending time with family, traveling, reading, writing, chocolate, coffee, nature and hanging out with her kitties.