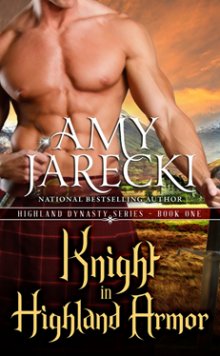 Grieving from the death of his wife, Lord Colin Campbell listens to the cries of his newborn son whilst penning a missive to the king. With no marriage prospects, Colin petitions his majesty for help in finding a stepmother. Never again will he fall in love—the death of a woman brings more pain than losing a whole contingent of men on the battlefield.

Feisty, quick tongued and smart, Margaret Robinson is delighted when her father receives a messenger from the king…until she discovers what news he brings. In a sennight, she will wed the notorious Black Knight—her life is about to end.

Tension builds during the wedding and deteriorates from there…until an accident draws them together. Just when their love begins to blossom, a dire request arrives from the Pope. Colin must join the Crusades at once.

Their fragile love is forced to withstand the seductions of hell—Margaret tempted by a scoundrel laird—Colin courted by Satan himself. Aye, the war for Christendom could very well ruin their dreams forever.

Margaret reached into her purse to pluck a farthing when horse hooves pummeled the ground. Looking up, she scarcely had the chance to dash aside. Two riders thundered through the fete at a brisk canter. She tripped over her gown. The fruit flung from her basket as the horses sped past. Margaret crashed into something sturdy and hard. Her hands whipped around it, saving herself from falling. Her hood flew from her head and dropped to her back.

It wasn’t until a pair of massive arms encircled her that she realized she’d fallen into a man—a very large, very strong man. She inhaled. The heady and exotic fragrance of cloves laced with a hint of ginger and male toyed with her insides. Struggling to drag her feet beneath her, Margaret made the mistake of grasping him tighter. His back muscles bulged beneath his quilted doublet. Her heart fluttered.

“Forgive me,” she uttered breathlessly.

His enormous hands held her shoulders firmly and helped her gain her balance. “Are you all right, m’lady?”

Flustered, Margaret pushed away and smoothed her fingers over the white ribbon encircling her crown. She brushed her fingers down the length of her exposed tresses, cascading over her shoulder to her waist. First, her gaze leveled on his red tunic, with a white cross emblazoned on the center of his very broad chest. Then her eyes drifted to his face, framed by dun-colored curls. Beneath his cap, they shone like silk in the sun, and she wanted to reach up and touch them to see if his hair was actually as soft as it looked.

Dark brown, wide-set eyes gazed upon her with a glint of humor. They were so friendly, her tension immediately eased. His features were undeniably masculine; his bold nose slightly bent toward full lips that grinned, revealing a row of healthy white teeth.

“I…I am unscathed, thank you.” Margaret inhaled a stuttered breath and hoped to heaven she wasn’t blushing. “Please forgive me.”

“There is nothing to forgive. Those lads had no business riding through the fair at full tilt. I shall have a firm word with them.”

“I’m sure they are long gone…” Margaret peered up at his feathered ermine cap—a fur only worn by Scottish barons like her father. “…m’lord.” She stepped back, taking in the whole picture. She’d seen the square white cross on his tunic somewhere before—it definitely identified him as a knight, though she could not place the order. Unusually tall, he had to be at least eighteen hands—six feet was enormous, especially compared to her five. He wore a stylish doublet of black beneath the sleeveless tunic. His woolen hose were also black, and they clung to his thighs like a second skin. His muscles bulged when he stepped toward her with fashionably pointed shoes.

He bent down and retrieved her basket. “I believe this is yours.”

He frowned and stroked his bold chin. “Most unfortunate. Please allow me to replace it.”

“That should not be necessary. I only wished to help a poor man feed his family.”

“Most charitable of you, m’lady.” He offered a polite bow. “If you no longer require my assistance, I shall be on my way.”

“Very well. Should I fall again, I shall simply find another gallant knight to keep me from dousing myself in the mud.”

“A lucky man indeed to rescue a lady as bonny as you.” He bowed again and tapped his fingers to his hat. “Good day, m’lady.”

Margaret swooned, watching him walk away. Broad shoulders supported by a sturdy waist. To her delight, the knight’s doublet was short enough to give her a peek at his muscular buttocks. With a sigh, she smacked her lips while the crowd swallowed up the magnificent warrior’s form. If only her betrothed could be half as handsome.

“Margaret,” Mother called from across the aisle. “Come, I have something to show you.”

This time, she looked for racing horses before she set out. God forbid she fall into another knight. And heaven help her. On the morrow, she’d have to look upon such magnificent specimens with disinterested eyes. How on earth would she do that?

3 Signed print copies of KNIGHT IN HIGHLAND ARMOR (or reader's choice)
3 Free Download codes for the audio version of Beauty and the Barbarian (or listener's choice)
3 SWAG packets including a $5 Amazon Gift Card.

Amy adores Scotland. Though she now resides in southwest Utah, she received her MBA from Heriot-Watt University in Edinburgh. Winning multiple writing awards, she is now focused on the genre of Scottish historical romance. Amy loves to write steamy edge-of-your-seat action adventures with rugged men and fascinating women who weave their paths through the brutal eras of the fifteenth and sixteenth centuries.