Before I dive into the ins and outs of my debut, I just want to say thanks for having me at Night Owl Reviews! I’m honored to be here.

So, what can you expect from my debut fantasy romance, Kingdom of Exiles? Magical creatures, swoon-worthy assassins, black-market deals, secrets, and of course, lots and lots of kissing. The story follows two main characters, Leena and Noc, and a handful of secondary characters who are Noc’s close friends and brethren.

Leena Edenfrell, exiled beast charmer, sells magical creatures on the black-market to survive. Which, unfortunately, gets a bounty placed on her head. Enter Noc, leader of the undead assassins guild, who’s as cold and detached as he is lethal. When she strikes a bargain with him—four mythical beasts in exchange for her life—he agrees. Not only because these beasts could protect his family, but also because there are whispers of a creature that has the ability to grant any wish—something he desperately wants in order to remove a decades-old curse that threatens anyone he loves.

Leena, Noc and his three closest votaries set off on a beast hunt across Lendria. But both Noc and Leena are hiding something—and each of them will stop at nothing to get what they want. But as forced proximity is known to do, something far warmer starts to grow between them, until they’re not only trying to outrun the people behind Leena’s bounty, but their growing emotions which might just have a death sentence of their own.

Without giving away any spoilers, that’s about the gist of what you can expect from Kingdom of Exiles! If you like Assassin’s Creed or Fantastic Beasts and Where to Find Them, then this book might be up your alley. I also lovingly refer to it as the “dark Pokémon book,” so if you’re into a world full of creatures you’ve never seen or heard of before—all with special powers and weakness—then get ready for a fun tale.

Kingdom of Exiles really tries to highlight all the favorite things I love to read about: magic, creatures, enemies-to-lovers, and romance. Building this world and unique magic system has been a blast. I hope you’ll give this story a shot and shot and learn for yourself exactly how Noc and Leena get themselves out of this mess! (Not to mention all the wonderful beasts you’ll get to meet!)

Assassin's Creed meets Fantastic Beasts and Where to Find Them in this gripping, epic fantasy romance trilogy.

My heart wasn't part of the deal when I bargained for my life,

But assassins so rarely keep their word.

Exiled Charmer Leena Edenfrell is running out of time. Empty pockets forced her to sell her beloved magical beasts-an offense punishable by death-and now there's a price on her head. With the realm's most talented murderer-for-hire nipping at her heels, Leena makes Noc an offer he can't refuse: powerful mythical creatures in exchange for her life.

Plagued by a curse that kills everyone he loves, Noc agrees to Leena's terms in hopes of finding a cure. Never mind that the dark magic binding the assassin's oath will eventually force him to choose between Leena's continued survival...and his own.

In a game of trust and half-lies, only one thing can be certain: traps capture more than beasts and ensnared hearts are impossible to untangle.

This giveaway is now over. The lucky winner is: Tamara Kasyan

Maxym M. Martineau is an article and social media writer by day and a fantasy romance author by night. She earned her bachelor’s degree in English Literature from Arizona State University, and lives with her husband and fur babies in Arizona. Connect with her at MaxymMartineau.com or through Twitter and Instagram @maxymmckay. 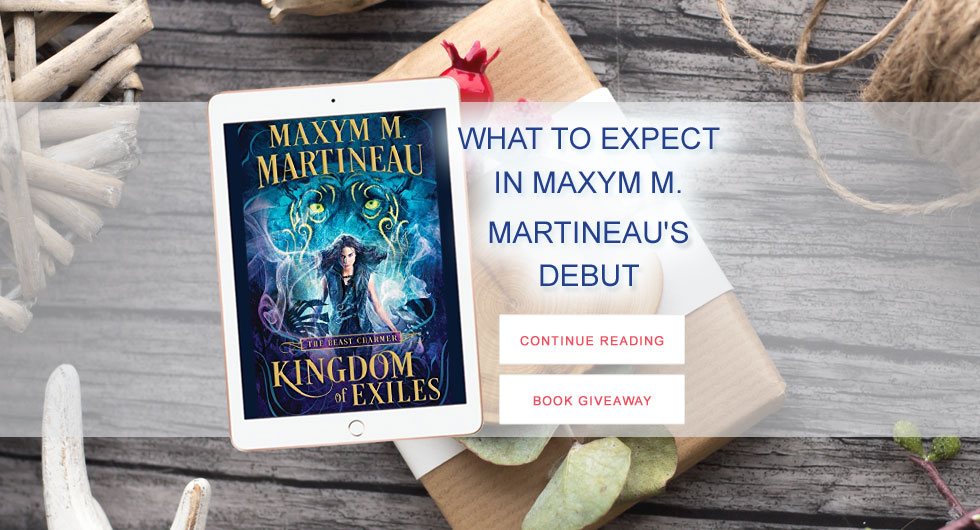