Excerpt: Joy to the Wolves by Terry Spear

It's time to start a new paranormal romance series with a Christmas special. Plus enter to win a copy! Enjoy!

Meet the shifters of the Red Wolf pack...

As Christmas approaches, red wolf shifter Brooke Cerise unexpectedly inherits an antique shop in Portland, Oregon. But when a missing reindeer calf turns up on her property, she becomes embroiled in a kidnapping case and the primary suspect of far-too-intriguing shifter Detective Josh Wilding.

Josh doesn't intend to fall for the mysterious new woman in town, but Brooke gets under his skin from the moment they meet, and he can't help his instinct to protect her. These red wolves are both on the hunt for love, but there's a mystery to solve before they can enjoy their holiday happy-ever-after.

Brooke grabbed her bag of money for the cash register from the safe she’d installed in the house, set her security alarm, and closed and locked the door to her house, then turned to see Detective Wilding peering over her gate at her, startling her. This was so not the way she wanted to start her day. “It’s locked, okay?”

“I see that. The new latch seems to work.”

As much as she knew she needed to unlock the gate for customers, Brooke didn’t want to unlock it for the detective. She let out her breath and stalked across the cobblestone walkway to the gate, pulled the chain of keys to the shop—­locked cabinets, house key, and gate keys—­out of her pocket, and unlocked the gate. “Did you put the new latch on? I mentioned it last night, but you didn’t say you had done it.”

“Does anyone else have the key to unlock the gate?” the detective asked.

“Unless my great-­aunt gave someone a key, no.” She left the gate open, not sure if he wanted to enter the courtyard, but she had a lot to do to get ready to open her shop, and she wasn’t standing there all day waiting to hear what he had to say. She headed down the path to the back door of her shop. The gate closed behind her.

She heard his footfalls on the garden path, heading in her direction. Apparently it was too much to hope that he had left.

Brooke unlocked the shop and entered it, wanting to shut the door in his face and lock him out. But she’d rather get this over with now so that he didn’t harass her while she had customers in her shop.

Against her better judgment, she let him come inside and walked into the hallway to turn off her security alarm, then went to the kitchen to make some peppermint mocha for herself while he shut the door.

“Be sure and lock it.” She didn’t want customers coming in through the courtyard, thinking she was already open and slipping into the shop through the back door before she was ready.

He locked the door with a click. Suddenly, she felt vulnerable, alone, locked in with a wolf who believed her guilty of a crime.

He watched her make the peppermint mocha. “Got some more of that?”

Yeah, but not for him. She let out her breath and made him a mug. “I didn’t steal the calf. I had no idea it would be here when I left my house yesterday morning.” Then she pulled out her phone and looked up her legal rights. “By the way, the Fifth Amendment to the Constitution says I don’t have to say anything to you in the off chance I might incriminate myself.”

He’d just taken a sip of the hot drink and choked on it.

She pointed to her phone. “In addition, I have a right to an attorney, according to the Sixth Amendment.”

He continued to cough, trying to clear his throat. She almost felt sorry for him. Almost.

“And the Fourth Amendment gives me rights against unlawful searches and seizures.” She took a sip of her hot peppermint mocha and swore the drink instantly made her feel better. Less aggravated with Hot and Sexy standing before her, tears in his eyes.

He cleared his gravelly throat, coughed, and cleared it again. “You know, when people start telling me their rights—­”

“Yep, that’s what the police try to tell you.”

His eyes widened. “You have a lot of experience with police interrogations?”

She scoffed. “I’ve been in a couple of car accidents over the years, neither of which were my fault. Somehow, the investigating officer always makes it seem like it’s your fault. Once, I was accused of stealing a blouse from a store when I had paid for it. The real culprit got clean away, while the store cop made me return to the store and have the clerk identify me as the thief. You should have seen the look on the clerk’s face. Of course it wasn’t me. I had my bag and the receipt for the blouse and had just purchased it, so she recognized me as the one who had paid for the merchandise. The woman who hadn’t? She was long gone.”

“Did you plead your rights to the store cop based on all the amendments?” He sounded half-­amused.

Brooke wasn’t amused. “The clerk cleared me. You, on the other hand, haven’t.”

“Peppermint mocha, and if you drink it down the right way, it is.” She left the kitchen and began to turn on the Christmas music, store lights, and Christmas lights.

“Do you know any male wolves in the area? Besides me? Or my brother?” the detective asked, following her. “You didn’t say whether you lived alone or not. Instead, you misdirected the conversation when you asked to see my ID.”

This giveaway is now over. The lucky winner of the print copy is: Daniel M 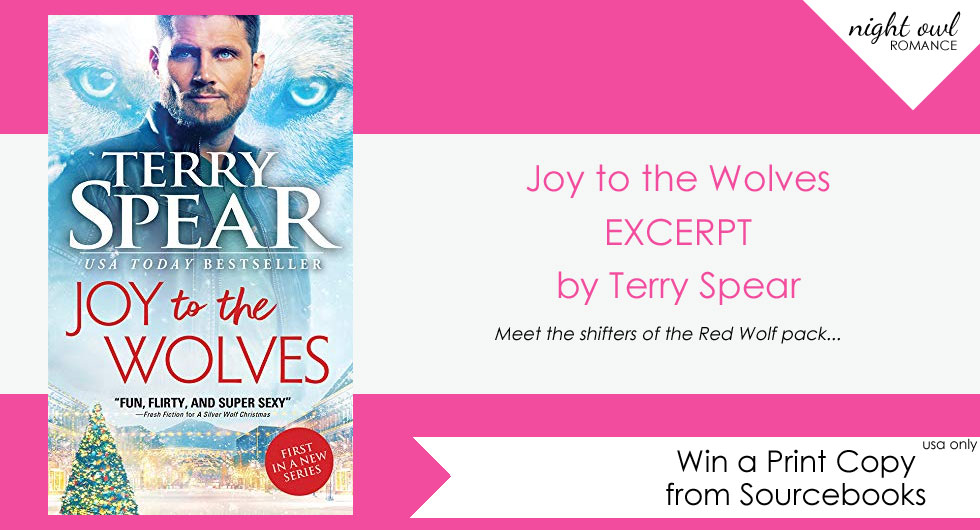