Today Sasha is sharing the first book in her new Kings of Country series and the main characters bios. Plus we get an excerpt!

So lets get started.

Music is all he has...but is it enough to heal them both?

Jace Black went from an oilfield roughneck to an overnight singing sensation. Now he's working on a duet with country music legend Krystal King, and he's determined to earn his way to the top. But the more time he spends with Krystal, the more he finds himself falling for her?and he's beginning to be more interested in her than he is in making a name for himself.

Krystal King grew up on stage and in the spotlight. No matter how golden her life appears, her past left deep wounds. But Jace Black makes her wish things were different. To do that, she'd have to risk letting him in... And that might be too big a risk for her battered heart to take.

Jace grew up understanding the importance of hard work. His grandmother raised him—teaching him all about respect, loyalty, and the how to be a good man. Whether he was working in the oil fields, acting as a local bail bondsman, or singing at a small-town honky-tonk, he always gave 110%. When his little sister enters him in a reality television singing program, he has no expectations. Winning was a complete surprise. But now that he has won, the money and the record deal, he sees this as the opportunity to give his little sister an easier life. The fact that he’s getting to work with his favorite group, The Three Kings, makes it that much better. Meeting Krystal King puts a different slant on things. Now he doesn’t just want to succeed on stage and in the recording studio, he wants her to give him—them—a chance. Even after the heartbreak and loss he’s been through, there’s something about Krystal that makes him think she might be worth the risk.

Krystal’s father was a music legend. She’d never known a time when a tour bus, invasive media, and public appearances hadn’t been a part of her life. When she, her twin sister, and her older brother formed the country music group the Three Kings, life didn’t change much. Only now, she was the target of nasty rumors and fame-seeking wannabe’s alike. She was pretty sure Jace Black was one of those. Even with his manners and soft-spoke ways, she wasn’t fooled. Until she heard him sing. He wasn’t pretending—he had talent. And the more time she spent with him, the more she began to suspect he was who he said he was: a good guy. A really hot good guy. But her past had too many skeletons, the sort that could destroy a life—let alone a career. Hard as it is, she knows it’s best to keep Jace at arm’s length. For his own good. But it would be easier if her heart would cooperate.

Krystal’s hand was shaking when she reached for the greenroom door. What if Heather didn’t like her? What if this was just a colossal mistake? Travis was going to make this unbearable.

“Krystal?” Travis asked, brushing her hand aside and opening the greenroom door.

“I can’t believe this!” It was almost a scream. “Ohmygawdohmygawd…seriously?”

It was the look on Jace’s face that set her mind at ease. He was smiling ear to ear, hurrying into the greenroom. She followed.

Jace was spinning Heather around, still smiling like a fool.

“You did this?” Emmy Lou’s voice wavered. She had enough sentimentality for the three of them. “Krystal.” She hugged her sister. “You did a good thing.”

She hugged her sister back, watching Jace and Heather’s reunion. “He missed her.”

“Little sisters.” Travis sighed, draping an arm over their shoulders. “You’re pests, but you’re our pests.”

Krystal smiled and swatted his chest. Emmy Lou smiled and rested her head on his shoulder.

“Right there with you.” Jace nodded. “Pretty unreal.”

“You were amazing.” Heather smiled up at him. “I was all, that’s my brother—who swears he can’t sing. Up there. Singing with Krystal King.” Her brown eyes met Krystal’s. “You’re like the single coolest person ever.” The way Heather was looking at her, she almost believed the girl.

Travis pushed her forward. “She has her moments.”

Heather hugged her. “Thank you, so much. I wanted to be here, but there was no way. Thank you.”

Krystal hugged her back. “You needed to be here.”

“This is amazing. Being here and you guys. Seriously, thank you.” Heather stepped back. “I did that. I just hugged Krystal King. I am so sorry. You’re like you. I’m seriously sorry.”

“It’s just…I like, sort of idolize you, you know?” Heather paused. “Is that creepy? That is totally creepy, isn’t it?” She glanced back at her brother.

That’s when she realized Jace was staring at her. It was a new look. One she wasn’t sure what to make of.

“Am I messing things up?” Heather asked, covering her face with her hands.

“Oh, I know.” She was wide-eyed and blushing. “You’re way cuter in person—I didn’t think that was possible.”

“Liking is okay. Anything else is not allowed,” Krystal cut in, stepping between Heather and her brother with a narrow-eyed look of warning.

“Heather, I am so glad to meet you.” Emmy Lou was all smiling charm and sweetness.

The inevitable glaze of awe descended on Jace’s little sister and Krystal risked another glance at Jace.

His light brown eyes met hers. Thank you, he mouthed, nodding at his sister. When he looked at Heather, it was with so much love. He seemed…calm. Relieved. Excited. It made sense, needing to have some­one he knew by his side. Someone unconditionally on his side he could share this with.

And right then, Krystal knew the truth. None of this was for Heather. She’d done it all for Jace.

Giveaway Over: The lucky print book winner is: Bonnie Hometchko 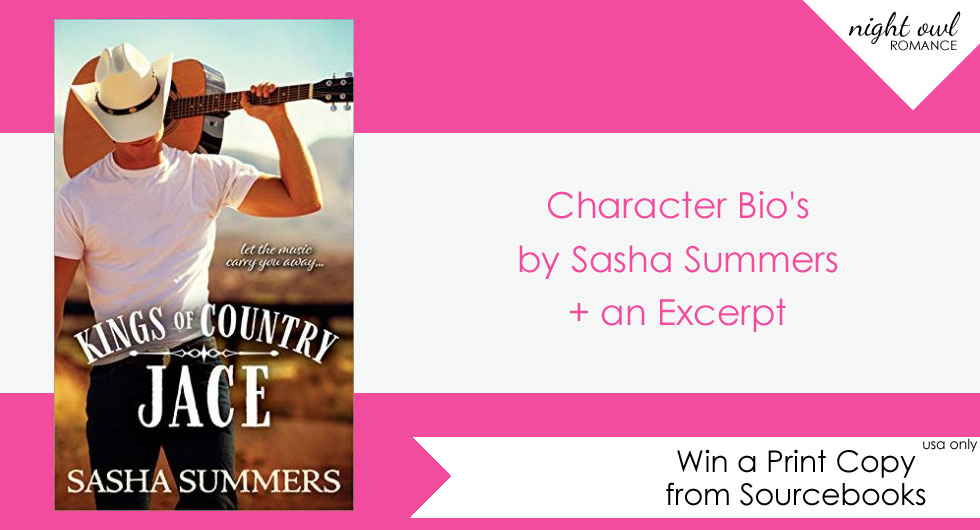