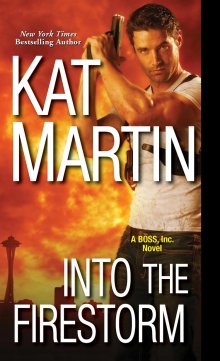 M. Cassidy—Luke Brodie had heard the name before, some novice bounty hunter working Seattle, catching tricky skips with more success than a newcomer should expect. But the dark curls, sparkly top, and impressive cleavage were not what Brodie had pictured.

Emma Cassidy is tough and smart and sexy as hell. She’s also popping up a step ahead of him every time he’s close to the capture he wants most . . . and there’s no room for learning on the trail of this monster.

Emma has idolized Luke Brodie, the bounty hunter who can bring anyone in. The big man in the soft shoes, with a face like a fallen angel and a reputation for breaking hearts. Watching him in action is intoxicating. But her fight with Rudy Vance is fiercely personal. If he gets too close, Brodie will find out just how ferocious she can be . . .

Emma was scared.  It hadn't happened a lot during her brief career as a bail enforcement agent, but she was scared now.  So far she'd been able to hold her own, but that was about to change.

She'd unlocked her car and almost made it to the Glock beneath her seat when the three stooges from hell grabbed her and pinned her against the car door.  Her ball cap went flying.  One of them dragged the scrunchy out of her hair, sending her dark curls flying around her face.  Her heart was beating like crazy, her mouth dry as dirt.

She had to suck it up and she had to do it now.

"Let go of me," she said with cool authority or at least hoped it sounded that way.

"You hear that, Badger?" stooge number two said.  "She wants you to let her go."  The men guffawed in unison.

Badger leaned over her, pinning her with his body, his breath hot and foul on her face.  He was big and beefy, and the determined look in his eyes made her inwardly cringe.

"I thought you was a boy till I seen them pretty boobs.  We gonna have some us fun tonight, lady."

Unfortunately for Badger, he turned to look at the others as he laughed.  Emma twisted, jerked her knee up, and slammed it into his privates, just the way Len had taught her.  Badger let out a yowl that could be heard for miles around and collapsed to his knees, grabbing his crotch and gasping for air.

Emma bolted, only to find herself trapped again by stooge number two.  When he grabbed her shoulders to block her way, Emma did an Inside Rolling Elbow, bending her arms, jerking her right elbow up and slamming it into his face.  There was an eerie crunch of bone, then blood sprayed all over the front of her windbreaker.

Nausea rolled through her.  It was one thing to practice self defense, another to actually see the results of what you'd done.

The instant of hesitation cost her.  She hadn't realized the guys from the bar had poured out into the parking lot and formed a semi-circle around her.

"You're gonna pay for that, lady," stooge number three said.  Big and brawny, he had an ugly scar down the side of his face that made her stomach roll again.  "Strip her out of those clothes," he said to the others.  "Let’s get this party started."

Emma made a sound in her throat as he grabbed hold of her windbreaker and jerked her forward.

Her insides were shaking.  Emma sliced a desperate glance toward the sound of the deep male voice.  Luke Brodie stood behind the half circle of men, long legs splayed, face as hard as steel.

Once more standing, Badger shifted nervously, his face still waxy pale.  "We didn't know she was yours, Luke."

They knew each other?  Badger turned to stooge number three.  "That's Brodie.  Best do what he says."

Stooge number three carefully released his grip on the front of her jacket, brushed off a piece of lint that didn't exist, and took a step backward.

"No harm done," Luke said with a hint of southern drawl that reminded her he was from Texas.  "Emma can be a real handful.  You can see what I have to put up with."

Luke jerked his head, silently commanding her to move toward him.  Emma clamped down on the urge to run in the opposite direction and walked a step at a time over to where he stood behind the circle of men, who had turned and now faced in his direction.

"Get in the Bronco," he commanded.  Though she would rather have driven her own car home, Emma didn't argue, just gave the lot a quick perusal, spotted his battered old Ford, and walked toward it.

By the time she had closed the door and settled herself inside, Luke was behind the wheel.

"Put on your seatbelt," he growled, strapping his own on, which surprised her only a little.  He probably knew driving without a belt took thirty years off a person's life.  From what she knew of him, Luke Brodie wasn't stupid.

When the Bronco shot backward, spinning its wheels, she realized what a smart move the seatbelt was.  The car fired out of the lot and shot off down the street at supersonic speed.

"Not a word, Emma."  He swore foully, making Emma's face heat up.  "I can't believe you went into a place like that by yourself."

Luke was really mad.  She wondered if she should be frightened, though the image she had of him didn't include Luke as a woman-beater.

He turned the corner and the car slowed a little.  She figured that was a good sign.

"What did you think was going to happen when you went in there tonight?" Luke asked.  She had a hunch he didn't really expect an answer.