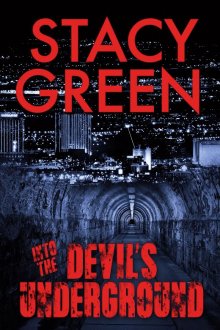 Into The Devil's Underground by Stacy Green - @stacygreen26

Into The Devil's Underground

For Emilie Davis, it was business as usual in her job as bank manager of WestOne until two men storm in demanding cash. However, it doesn't take long before Emilie learns one of the men isn't there for money—he's convinced they have a connection and has come to claim her. And he won't give up.

When hostage negotiator Nathan Madigan and Las Vegas SWAT enter the bank on a rescue mission, Emilie's captor makes a shocking escape into the abyss that lies beneath the city: the Las Vegas storm drains, a refuge for the downtrodden and the desperate.

Through the darkness of the Devil's Underground and secrets from her past, Emilie finds there is no escape from her stalker. She turns to Nathan, who is determined to save her no matter what it takes.

But will it be enough?

Re-Published. Originally titled Into the Dark. This book has gone through major edits.

Emilie wished she could ask the hostage negotiator–his name was Nathan, she reminded herself–why he’d put himself in this position. Did he really think he could help them more as a hostage? How could he so easily decide to trade his life for a complete stranger’s?

Hope sparked in her frozen chest when Nathan came inside. Maybe he could save them.
Creepy went rigid when Nathan entered, and Emilie swore she felt the rage rolling off her captor. But he never said a word to Joe or the new hostage, never made a move away from her.

“Have you heard of the devil’s underground, Miss Emilie?” If he felt threatened, Creepy’s voice revealed nothing. The words rolled off his tongue with ease, his faint accent making everything terrifyingly pretty.

“It’s a dark, dark place. A place hope long ago abandoned. And yet some people choose to be there. Some even like the refuge, the freedom. It’s a place of pure ugliness and yet, there’s a beauty in the lives existing in the undergound.”

“In a strange way, it is,” Creepy said. “Sometimes, when I’m visiting the underground, I liken it to Dante’s journey. ‘Justice moved my supreme maker: I was shaped by divine power, by highest wisdom, and by primal love.’” He nodded his head like a preacher deeply moved by his own sermon. “The underground is their path to hell. Because we all choose our paths, right?”

Emilie wished darkness wasn’t falling on the lobby. If she could only get Nathan to see her eyes, surely he’d realize how terrified she was of this man. She glanced at Creepy her stomach launching butterflies when she realized the hostage negotiator watched them.  Somehow, maybe she could make him see.

“I’ll show it to you sometime.” Creepy snatched her thoughts back to him. Still, she stared back at Nathan.

“The devil’s underground. I’ll take you there. Soon.”

The knot of fear residing in her stomach exploded, streaming its contagion into her blood. She tried not to cry out loud, forcing herself to look at Nathan as if he were Christ himself.

He was her only shot at salvation.