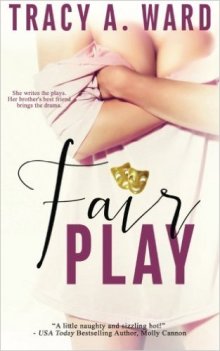 Tracy A. Ward on If Loving Romance is Wrong, I Don’t Wanna be Right

It appeared in my social media feed one sunny day, not long after the announcement that 50 Shades of Grey was being made into a movie. I, like many of my online friends, was pumping my fist, having fun and casting predictions for who would play Christian and Anastasia. But off in a corner, there was that one friend, writing a diatribe, reprimanding women at large for being disrespectful to their husbands by reading and enjoying such garbage. And worst of all, for sinning against God. While everyone is entitled to their opinion and social media gives anyone with a device a platform to express those views, I have a dramatically different take on the subject. While I’m no bible-beater, I did grow up going to church. I can respect some religious points of view (sex outside of marriage for example), but there are others that leave me shaking my head.

You are not God.

First things first. Last I checked, only God is the judge of what’s sinning against Him and what isn’t. Period. The end. We all have different tastes and comfort zones when it comes to books. The good news is the TBR pile in your library is stacked with volumes that were chosen at your sole discretion. No one is forcing you to borrow from mine.

Reading romance novels is a form of cheating on your spouse.

According to one viewpoint, any action that conjures affection or lust for anyone other than one’s spouse is a betrayal. If this is the case, wouldn’t reading the Bible also be off-limits? The “good book” is rife with love stories from Adam and the temptress, Eve, Abraham and Sarah (hello? did you miss the part where Sarah gave Abe permission to play hide the billy-club with her maid?), Sampson and Delilah. And tell me you didn’t get a very vivid and erotic image of the heroic David, watching Bathsheba as she bathed on that roof. Do I even mention Song of Solomon?

To my way of thinking, investing time in reading a novel, which is a story surrounding a group of fictional characters, is no more cheating than watching Lifetime Television or reruns of Dr. Quinn Medicine Woman. Outside of sexual addiction (which goes way beyond the scope of this piece), romance novels can actually enhance intimate relationships between couples. I can’t count the number of times I’ve gotten a thumbs up and a wink from a husband whose wife has picked up my book or one I’ve recommended. Cheating doesn’t reside in the fantasy world of fiction. Cheating is when one party re-enacts that fantasy with someone other than their spouse.

Okay. I’m going to read between the lines on this one and guess that those unrealistic expectations are referring to those of a physical nature. Most men aren’t playboy billionaires. They don’t sport six packs (unless Budweiser is written across the center). They don’t have a ten inch love rocket, and even fewer can actually give you a vaginal orgasm, much less last long enough to let you come first. Thankfully, for the survival of our species, women are intelligent beings. They understand the difference between real life and imagination. And they fall in love anyway.

It’s the gateway drug to promiscuity.

While there is a sub-genre completely dedicated to whatever freak flag you fly (and hey, you’ll get no judgment from me in whatever that is), the majority of romance novels published today follow one man and one woman, who only have eyes for each other, and end up living happily ever after.

So what’s the problem?

It’s you, dear reader. You’re the problem. You jump from assassins to federal agents, to billionaire sheiks, to athletes, rocks stars and *gasp* vampires and werewolves. You’ve become a literary slut.

For shame, for shame.

Before you know it your partner is no longer going to be enough for you and those little blue shorts on the Fe-Ex driver will soon start looking better and better. Next it’ll be time to declare open season on all meter readers. What about bartenders and bus drivers? The pharmacist? Your child’s pediatrician? Might as well break out the phone book and screw your way through A-Z. All because the fantastical allure of reading too many romance novels has caused you to succumb to nymphomania, with no control over your own faculties.

Really? Do I even have to counter this argument?

I could tongue-in-cheek this subject all day long, but all it does is hide the more pertinent issue. If any of the above points have become a serious concern in your relationship, the problem doesn’t lie in books. The problem is your relationship. Think about that for a while I engage in frequent and illicit affairs with multiple book boyfriends.

Who knew love could bring a playwright so much drama? Writing three plays for a nationally acclaimed theater in Phair, Texas, was never supposed to put Ashlyn Carter’s inheritance at risk, or make or break her future. And it certainly wasn’t supposed to force her into constant contact with the very guy she’s avoided since her teenage crush-gone-bad days. Noah Blake. He's Ashlyn’s enemy, for good reason. As her older brother's best friend, he seems hell-bent on interfering with nearly every aspect of her life. So how then does he also seem to be her muse? When Ashlyn reluctantly agrees to act out scenes with Noah from the play she’s writing in order to trigger her creativity, the spark of passion she’d felt for him as a teenager flares up again. But there's more at stake than just her future as a playwright or the inheritance she never cared about in the first place. Finding out the theater she loves is in danger of closing puts everything she thought she knew and felt about Phair…and Noah...to the test. Will there be a standing ovation for Ashlyn Carter, playwright, or will the curtain drop on her heart and fade to black? Only by facing their biggest fears together will Ashlyn and Noah learn to trust in themselves and each other.

After the birth of her children, Tracy had an epiphany: banking just wasn't her thing. So she quit her corporate job, let her nanny go and became a not-so-desperate housewife by day, Sexy Women's Fiction author by night. Her characters are every-day women, following their dreams, searching for that elusive happily ever after.