I have. I have experienced all of the above.

I’ve felt someone standing right behind me when no one was there. I’ve had dreams that felt like more than just a dream, and I’ve had my mind toss an image at me that scared the bejeebies out of me. And I’ve definitely felt the essence of someone I loved and lost.

The first time it happened, I was only eleven. I woke up and my great grandmother, who hated the contemporary clothing styles, was hovering over me. She told me I was going to have to give up on those shabby modern clothes because some day I would get a gown just like the one she was wearing. Oh, did I mention she had died the week before? The thing I noticed most about that grown was that the skirt kept flowing back and forth as if she didn’t have legs or feet. I wasn’t even scared. But I got up and went into my parent’s room and told them. They assured me it was just a dream. I still don’t think so. As an adult, I read a book on angels, and the author said the most common thing people noticed about them was that they didn’t have feet.

Later as a teen, I once dreamed of funeral with a tiny casket and pink flowers. I watched as the casket was lowered into the ground, and I woke up with start when I saw my name, Christie Hunt, on the tombstone. Disturbed, I told my mom about the dream, and she told me something I swear I never knew. My father had a sister, Christie Hunt, who died at a few months old. I had been named after her.

Then there was the time I was writing articles for magazines, and I went to The Admiral Nemitz museum in Fredericksburg, Texas, to write a piece about the museum. The moment I stepped inside, I was hit with this dark feeling of how ugly war was. When I saw a kimono with blood on it and the sign read that she’d killed herself because she saw American’s coming and she feared they would rape her, that feeling deepened. The sign also said that an American had taken her kimono as a souvenir. Was really was ugly.

When I took a picture of that exhibit, my flash batteries burst and I didn’t get the image. Hey, batteries burst, right? No big deal. I went back a month later to take pictures to accompany the article which I had sold. Again, I pointed my camera at the Kimono, and my batteries burst for the second time. I pretty much assumed that someone didn’t want that kimono included in the article. And I didn’t include it.

So you see, I’ve always been fascinated by spirits. And in 2010, when I was approached to write the paranormal young adult series Shadow Falls, I asked the editor, “Can I have ghosts?” To me, the scenes where my heroine, Kylie Galen, communicated with the spirits were the most powerful in the ten-book series.

And last year when I started plotting a new series, that theme played an even bigger part. The Mortician’s Daughter is cross between Ghost Whisperer and Veronica Mars. Riley Smith is the daughter of a mortician, and her dad keeps bringing his work on home with him. Or rather his clients follow him home.

Riley can see and talk to them. For some odd reason, fate has given her the job of helping these spirits complete a few things before they pass on. A job she doesn’t feel qualified to do. Not when her own life is such a mess. And especially when solving a new ghost’s problems lands her face to face with the young woman’s murderer.

If that’s not bad enough, her other visiting spirit is hot guy her age. A hot guy who is helping her adjust to the new school, the new life, and possibly, her father’s alcoholism. A hot guy who would make the perfect boyfriend if he were alive.

The Mortician’s Daughter: One Foot in the Grave is the first in a three-book series. I hope you’ll join me as Riley Smith confronts ghosts and the mysteries that come with them, tries to save her father, communicate with her dead mother, and navigate through a new school and young love.

One Foot in the Grave - The Mortician’s Daughter, #1

Her dad’s job is with the dead . . . and he’s bringing his work home with him.

Once again, seventeen-year-old Riley Smith is the new kid in school and her dad’s career has her back to being dubbed a freak. Truth is, she’s a much bigger freak than her classmates think. The only company she keeps these days is the dead who follow Dad home from work. She can see them. She can speak to them. And Fate seems to think she can help them solve their last problems so that they can move on to the other side. Which is odd, because with the loss of her mother and her father’s alcoholism, she’s got enough problems of her own.

But nothing could prepare her for the next tormented young spirit who darkens Riley’s door. The young woman’s death wasn’t the accident everyone believes. Soon Riley finds herself face-to-face with the killer and her only protection comes in the form of another spirit, Hayden, a boy her age with a heart-melting smile and understanding eyes that make her feel safe. If she can escape becoming the killer’s next victim, Riley knows she’ll have to help Hayden move on too, but what if she can’t let him go?

For thrills, chills, romance and laughter, preorder The Mortician’s Daughter: One Foot in the Grave today.

Entry Details: Comment on the content of this post in the comments area to be entered to win.
USA ONLY. 18 and over for entry.
Ends: January 25th, 2018 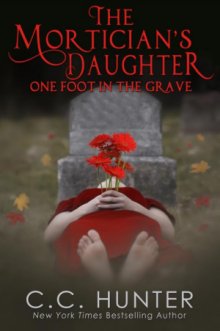