How a Writer Who Hates Outlining Plans a New Series

When I saw the requested topic for this post (outlining a series), I had to snicker a little bit because outlines are not my friend. In the writing world, I’d be considered a “pantser” (write by the seat of my pants), but that’s not entirely accurate either. I don’t just get an idea, sit down, and write. To sell the book or series to my publisher, I have to turn in a summary, so I have to have some general idea of what the book is about. Ten times out of ten, that summary changes completely by the time I finish the book. However, that doesn’t mean I don’t do some pre-planning.

Confession: I’m actually a writing worksheet junkie. My writer friends tease me about the pile of worksheets I break out when I’m working on a new book, but this system works for me. Every time I read a book about writing (and I obsessively read these kinds of books) and something clicks, I make a worksheet.

Over the years, I’ve developed a packet that I print out every time I’m starting a new book. If you’re a writing nerd like me, the list is at the bottom of this post. But if you’re a reader, you probably would rather know what these worksheets mean for the book.

For me, it’s all about characters. When I get an idea for a story, it’s almost always a particular character’s backstory that comes to me first. In the case of The Ones Who Got Away, the idea hit me as a question: What happens to people who are part of tragic national news stories after the cameras go away and the world moves on? How do you move forward with your life? How does having something like a school shooting (which is the backstory of this book) in your past change who you are and how you see life?

Those kinds of questions are what get my writing brain excited. I was a therapist once upon a time, so how people’s minds work is an ongoing fascination for me. In this story, it is so much about the characters finding their way in the world that the plot unfolded from that journey. Both Finn and Liv are stuck in some way in their lives, the past locking shackles around them in different ways. So to develop what would happen in the story, I needed to figure out what would make them break free and move forward. How could they fight for change and get their happily ever after? That’s how a story ends up getting written for me. No outlines. Just knowing as much as I can about the characters and then writing forward and trying to be true to what they would do.

As for developing a book into a series, that happens naturally for me—even when I’m trying to write a standalone! When I’m writing book one of something, a side character will inevitably show up and demand to get their own book. It happens every time. I can’t plan it. I  don’t really know who the next book is going to be about until I start writing the book before. In the case of The Ones Who Got Away, all three of Liv’s friends demanded their own stories as soon as they showed up on the page. So that is my plan—to give them each their own book. In June, book two, Rebecca’s story, The One You Can’t Forget will come out. So lots more to read about the Long Acre ladies in the next year or two. : )

Alright, now for the nitty gritty for those who are into that kind of thing.

(Note: I’ve made these worksheets from the information in the books for my own personal use. Besides the first two, the worksheets don’t exist online but you can get the info from the books.)

·         Character’s archetypes (I choose them for both hero and heroine) from the book Heroes and Heroines by Tami D. Cowden, Caro LaFever, and Sue Viders

Liv's words cut off as Finn got closer. The man approaching was nothing like the boy she'd known. The bulky football muscles had streamlined into a harder, leaner package and the look in his deep green eyes held no trace of boyish innocence.

It's been twelve years since tragedy struck the senior class of Long Acre High School. Only a few students survived that fateful night—a group the media dubbed The Ones Who Got Away.

Liv Arias thought she'd never return to Long Acre—until a documentary brings her and the other survivors back home. Suddenly her old flame, Finn Dorsey, is closer than ever, and their attraction is still white-hot. When a searing kiss reignites their passion, Liv realizes this rough-around-the-edges cop might be exactly what she needs...

Roni wrote her first romance novel at age fifteen when she discovered writing about boys was way easier than actually talking to them. Since then, her flirting skills haven’t improved, but she likes to think her storytelling ability has. She holds a master’s degree in social work and spent years as a mental health counselor, but now she writes full time from her cozy office in Dallas, Texas where she puts her characters on the therapy couch instead. She is a two-time RITA Award winner and a New York Times and USA Today bestselling author. 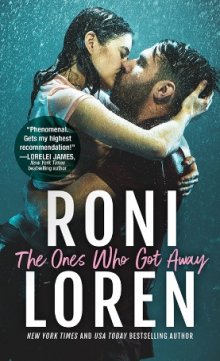