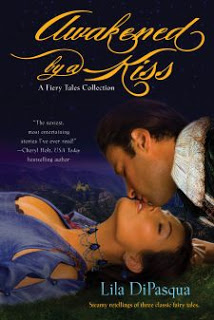 Enter to win a copy of Awakened by a Kiss by Lila DiPasqua. Two signed copies will be given away. Just answer this question to be entered:

You must be a member of the NOR newsletter to enter and live in the USA. USA Shipping Only. Leave the first part of your email address on your post so we can can make sure you are a member. Contest ends: 7/23/2010

I’ve written a historical romance anthology for Berkley. It’s rather scandalous. My summer debut, AWAKENED BY A KISS, is a Fiery Tales collection – steamy retellings of three classic fairy tales in the one book. I love it when historical heroes are sinfully seductive bad boys.

In AWAKENED BY A KISS, I’ve created three of them.

There is something about seeing an unrepentant rake fall hopelessly in love with the heroine that I find downright delicious. And in AWAKENED BY A KISS they do fall for them – hard.

Yet, what kind of woman can totally turn a seasoned roué and steal his heart? I paired off very different women with each of the men in these three Fiery Tales. Three women with different backgrounds and personalities, yet their impact on these rakes is the same. Poor heroes, they didn’t stand a chance. These lovely ladies are unlike anyone these gorgeous men have ever met – and much to their surprise, they’ve found their perfect match.

In the first Fiery Tale in AWAKENED BY A KISS, Sleeping Beau, the hero is rather an infamous rake – the handsome bastard son of the King. Legitimized by His Majesty, Adrien is treated like royalty. A night of raw passion with a mysterious woman has haunted him for five years. When at last he spots his mysterious seductress, he wants to know everything about her. Heck, he just plain wants her. It was supposed to be simply a torrid affair. But it wasn’t. It couldn’t be. Everything about Catherine de Villecourt inspires tender feelings as well as hot desire. This beautiful woman is a widow. Born into the wealthy middle class, she was married off to a Count and trapped in an unhappy marriage until the scandalous death of her husband.

It’s not just Catherine’s beauty that affects our hero Adrien, but her quiet strength, too. And the problems she’s had with her father are something that Adrien understands all too well. He’s had nothing but difficulties with his own powerful sire. She is a painter, a sexual soulmate and his one and only heart’s desire.

The second Fiery Tale, Little Red Writing, has a very passionate heroine. Anne de Vignon is a writer. A woman who feels strongly about the telltale stories she writes about powerful courtiers under the nom de plume Gilbert Leduc. Born into minor nobility, she doesn’t have much by way of social influence or financial means. What she lacks in social standing and wealth, she makes up for in her drive to seek justice for women against the powerful men who inflict suffering on them. Without recourse, these women were forced to endure whatever hardship, humiliation or heartbreak came their way at the hands of these men. The ambitious Count of Lambelle, Nicolas de Savignac, is a member of the King’s private guard and eager for promotion. His investigation into the identity of the mystery writer is supposed to be the means to his promotion in the Guard. He never expected passionate Anne would move him or touch his heart and leave him torn between love and duty.

Imagine being the favorite daughter of the King. It’s an enviable position to be in, right? Wrong. In the Fiery tale, Bewitching in Boots, Elisabeth must be vigilant at court. She sees the constant intrigue, the dishonesty and corruption as men and women vie for the King’s favor, willing to use her, or worse, harm her younger sister, if she isn’t careful. The only man who is honest and true is the former commander of the King’s private Guard. When Tristan is forced to spend time with the smart, strong Elisabeth, he sees her not as a spoiled royal brat, or a coquette, but as a sensuous woman whose loyalty is as great as her love.


AWAKENED BY A KISS – A Fiery Tales Collection


Excerpt of AWAKENED BY A KISS –