Excerpt: Here for You by Pat Simmons

Pat Simons is sharing the second book in her Family Is Forever contemporary romance series with you. You can enter to win book one in the series below and read an excerpt for book two. Enjoy!

Rachel Knicely's life has been on hold for six months while she takes care of her great aunt, who has Alzheimer's. Putting her aunt first was an easy decision—accepting that Aunt Tweet is nearing the end of her battle is far more difficult.

Nicholas Adams's ministry is bringing comfort to those who are sick and homebound. He responds to a request for help for an ailing woman but when he meets the Knicelys, he realizes Rachel is the one who needs support the most. Nicholas is charmed by and attracted to Rachel, but then devastating news brings both a crisis of faith and roadblocks to their budding relationship that neither could have anticipated.

This beautifully emotional and clean story contains a hero and heroine who are better at taking care of other people than themselves, a dark moment that shakes their faith, and a well-earned happily ever after.

While the Denver Broncos were announcing their choices, Rachel and Jacqui decided to take a quick potty break since the Titans’ picks weren’t until the nineteenth spot.

Near the concession stand, the two ran into familiar faces and chat- ted until someone caught Rachel’s eye. She blinked as her heart danced at the same moment as his eyes connected with hers.

“Nicholas Adams,” Rachel whispered. As he walked in her direction, she began to meet him halfway. “What are you doing here?”

“Rachel,” he said in a low, deep voice that seemed to project above the other noise. “You look...stunning, and I happen to like football.”

She blushed, something she rarely did when men complimented her. She usually owned it and responded with a saucy smile. “Thank you. You look amazing too.”

He chuckled. “I doubt that. The only men staring me down are those who are wishing they had your attention.”

They were quiet as they watched each other. “You haven’t called me,” he said in an accusatory tone that almost sounded like he was wounded. He had no idea how many times she’d wanted to. Rachel glanced

away, embarrassed, then exhaled. “I know.”
“Why?” He gave her a penetrating stare, then folded his arms in a

stance that indicated he would wait for her answer.
“I didn’t want to bother you,” she said honestly. “I figured you

moved to the next person on the prayer list.” She didn’t mention Mother Jenkins had called her twice to check on her.

“Bother me.” Unfolding his arms, Nicholas slipped his hands into his pockets. He smiled, and his dimples made an appearance.

She smiled too.
“I like those dimples,” he said, complimenting her.

“I like yours too.” Suddenly, a deafening roar erupted around them, and Rachel jumped, but Nicholas didn’t take his eyes off her to investigate.

An excited fan walked by, shouting to anyone who would listen, “The Titans picked Xavier Nelson!”

Nicholas gave the guy a high five. “That linebacker from Alabama is a good choice.” Then he turned his attention back to Rachel. His eyes sparkled. “See, I can multitask.”

He had a magnetism Rachel found hard to pull away from, but she didn’t want him to miss another highlight. “I guess I’d better let you go so you can enjoy the draft,” Rachel said, but she really didn’t want him to go. Until this moment, she hadn’t known how much she had missed seeing him and hearing his voice.

“I am enjoying myself just fine.” He reached out and took her hand. His touch left her fingers tingling.

Another guy approached Nicholas and cleared his throat. Although they resembled each other, Rachel thought Nicholas didn’t seem happy with the man’s presence.

“This is my brother, Karl Adams,” Nicholas said in an annoyed manner, never taking his eyes off Rachel.

“Nice to meet you,” Karl said with a sly grin. “I’ve heard so much about you.”

Rachel raised her eyebrows in curiosity, and Nicholas gave his brother side-eye, his nostrils flaring.

“You have my deepest sympathies about your aunt,” his brother added.

Of course, her aunt’s passing. Why was she disappointed that Nicholas hadn’t mentioned anything flattering about her? She exhaled. “It was nice meeting you, Karl, and good seeing you again, Nicholas.” She turned to leave, but he touched her arm. Rachel stopped herself from shivering, but that didn’t stop goose bumps from popping up.

“Call me, Rachel.” His tone was gentle with a hint of a plea.

“O-okay.” She was the first to walk away, and she could feel his eyes on her. She glanced over her shoulder and saw she was wrong. It was

different admirers who watched and winked at her, but she was only attracted to Nicholas Adams. How had the women at his church let him stay single this long? Rachel was curious to find out.

The lucky print book (Lean on Me) winner is: Cheryl Hart 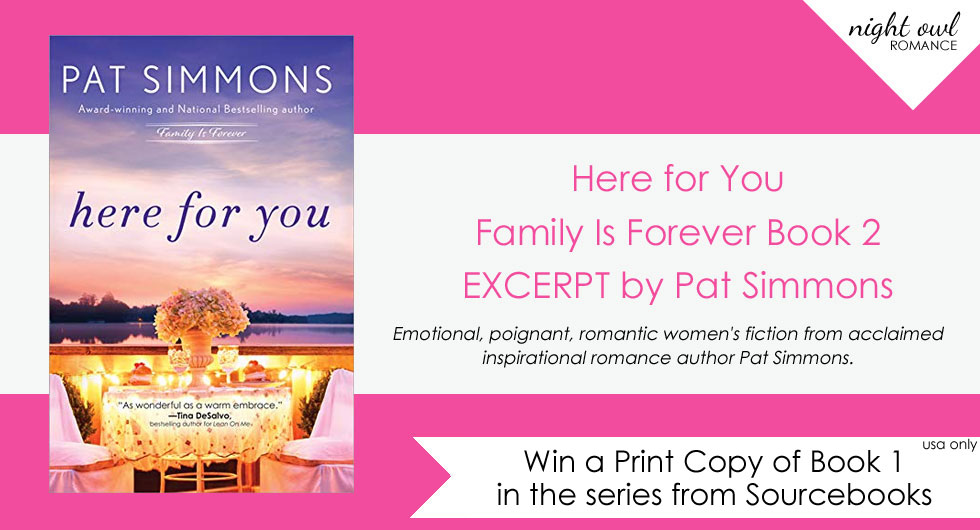