An Everyday Hero - Brought to You by Debbie Burns, Author of Head Over Paws

Today we have the fabulous romance author Debbie Burns stopping over to share one of her everyday heroes. Debbie writes fun contemporary romance featuring dogs and shelters. So today we get to hear about someone who is very deserving of praise.

While developing Olivia Graham’s character in Head Over Paws, I knew I needed to learn more about the intricate web of emergency animal rescue. I was fortunate to be able to meet and interview Linda Swoboda regarding her work as a volunteer animal rescue transporter. Upon talking to Linda, I was so impressed by the myriad of ways she helps homeless animals. Linda is an avid pet rescuer and has adopted and fostered many animals of her own through the years. After her husband died in 2004, Linda got involved with a southern Illinois rescue group and began transporting homeless animals for them. Often, shelters and city pounds end up overflowing. To keep homeless animals from being euthanized, animal rescue transporters like Linda help move them across the state and sometimes even across the country to get them into no-kill shelters and foster homes. Often, Linda has been one member in a chain of drivers working together to get animals across multiple state lines.

Linda has hauled all sorts and sizes of homeless dogs and cats in all driving conditions to get them into no-kill shelters. She has even driven a van for the Marion Humane Society to transport over thirty animals to shelters that could take them in. As a volunteer driver, Linda has had to be flexible. Accidents happen, vehicles break down…and sometimes not all of the animals fit in the van as anticipated. Linda has temporarily fostered dogs that didn’t fit in the week’s load to ensure they make it into a shelter that would find them a forever home.

As I got to talking with Linda, I learned she also does a variety of other volunteer work with dogs, including search and rescue work and therapy dog work, which is what she spends a lot of time doing now. When it comes to her volunteer transport driving, Linda speaks very highly of Candy Thomas of Crittergal Rescue. Candy is a fellow rescue animal advocate who introduced Linda to transport driving. Candy organizes a weekly run each Tuesday from Perry County to Champagne, Illinois, a nearly seven-hour round-trip drive. These animals are picked up there by other transport drivers and taken to shelters in the Chicago-area, Peoria, and also to the neighboring states of Wisconsin, Michigan, and Minnesota. Linda says that Candy’s lifelong dedication is truly admirable, and she would drive for Candy anytime, anywhere!

Thanks to caring individuals like Linda and Candy, it’s easy to find real-life inspiration for characters in the Rescue Me books.

Love can lead to your forever home

Olivia Graham isn't in a position to have a dog of her own, but her new position as a volunteer rescue driver for the local animal shelter will keep her close to her four-legged friends. When she's called to transport dogs and cats that have been misplaced by flooding, she doesn't hesitate to help, but her aging car isn't as reliable as she is...

She's picked up by veterinarian Gabe Wentworth, former EMT and firefighter, who's also heading to the rescue site. After a bad breakup, Gabe's embraced the hermit life. When he meets Olivia, he can't deny their irresistible mutual attraction, and his first thought is to run the other direction. But the more he learns about the woman who would risk everything to save vulnerable animals, the more he realizes what he might be willing to risk...

About the Author: Debbie Burns is an award-winning author and 2019 HOLT Medallion Award of Merit recipient. Her highly praised Rescue Me romance series features happily ever afters of the two and four-legged kind. She lives in Saint Louis in a gingerbread house that's almost cute enough to eat. In her free time, you can find her enjoying time with her two teens, two phenomenal rescue dogs, and a somewhat tetchy Maine Coon cat who everyone loves anyway.

This giveaway is now over. The lucky winner is Jessica Braun 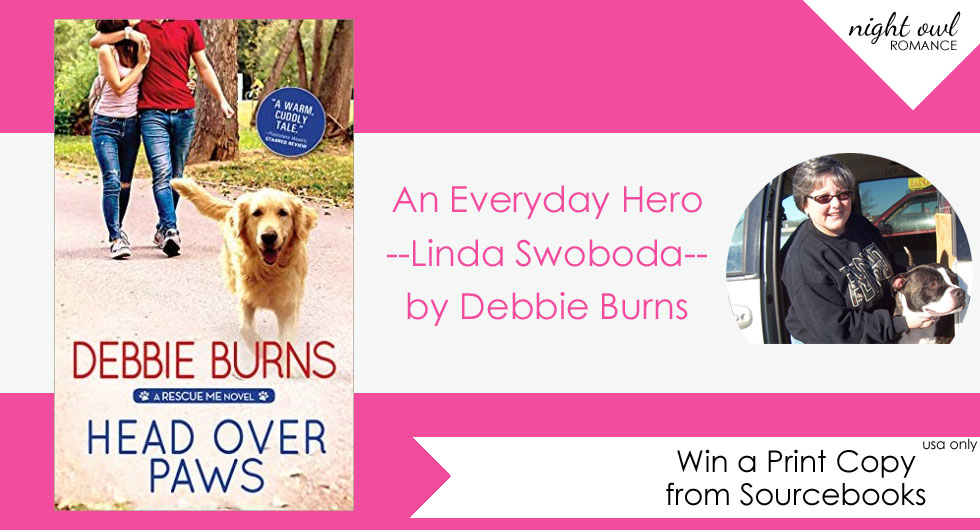