Today we have a lovely excerpt to share with you from Becky McGraw's book Hard Landing.

When Maddie Carter comes back from the grave, will Hawk have a fresh start with the one who got away?

Deep Six pilot, former Army Nightstalker, Rhett Hawkins, knew the day would come, but he had hoped it wouldn't be until after he was gone. Maddie Carter was destined to die young, because that is just how she lived. She flew by the seat of her pants and flying as all she cared about. He'd learned that the hard way, when he asked her to marry him and she shot him down.

But after her memorial service, Hawk just couldn't get past the feeling that something was wrong with the recounting of the events that led to the crash and her supposed death. Neither the helo or her body had been found. It drove him insane until he decided to do some investigation of his own. After getting conflicting stories from two surviving special operators, he knew he had to go the full distance to settle his mind.

Once in Central America, Hawk realizes there is much more going on than the Army knows. Not only is the now blacked-out military helicopter back in service, Maddie is behind the stick making drug runs for a brutal cartel. When he has to convince her she needs to be rescued, Hawk quickly realizes she is not the same. Captain Maddie Carter is scarred, hardened and has no memory of him or her former life at all.

When her memory starts to return and secrets are revealed, would they mean he'd saved her only to have to bury her again? And would those secrets change his own life forever, either way?

“I need to tell you something, Rhett,” Maddie said, putting her hand over his heart.

Those words never boded well with any woman Rhett Hawkins had ever met. They were even more ominous coming from a woman he’d been dating nearly five years. With a sigh, he opened his eyes and pulled her closer.

“What’s that, baby?” he asked, but not really wanting to know.

Hawk just wanted to recover quickly so he could have her one more time, before he had to return her to the Army and he had to fly back to Texas. This cramming as much time as he could with her into a weekend was exhausting, and he’d been doing it for four years.

Thank goodness the company used a helo maintenance firm in Mesa, or even this would be impossible. He was getting tired of trying to maintain a long distance relationship with her, so something had to change soon.

“I was accepted into the Nightstalkers. I leave tomorrow for three months training in Kentucky, then I’m being deployed to Honduras on a JCET mission.”

Every muscle in Hawk’s body went rigid as fear and anger consumed him. “I thought we talked about this and you were going to stay here?”

“I have to do this. My father went to a lot of trouble to get me the interview and pull strings so I’d be accepted. This ‘women in spec-ops’ thing is so new.”

Hawk growled and rolled to his side to push her away and pin her with his eyes. “There is a reason for that, baby—it’s fucking dangerous.”

“You did it and I’m just as good a pilot as you,” she replied, sliding her hand and her eyes away. “While you got in a year out of flight school because you’re a man, I’ve been trying four years and finally have my chance. You should be happy for me.”

The three years he’d served as a Nightstalker equated to at least ten years doing troop transport, or even flying assault. It was fun, exciting and rewarding most of the time, a huge ego boost, but the missions were that grueling and intense. That’s why he knew Maddie Carter wasn’t suited to them.

“If I thought this was what you really wanted, I would be happy,” Hawk said, trying to keep his voice even, which was extremely difficult. “But I know this is just another attempt to compete with your brother.”

Maddie needed to realize she would never be the soldier he was—because the Army would never let her be. She only had this opportunity to get into spec ops because of a military mandate deadline and her father’s intervention.

She might be as good a pilot as Hawk was now, but Captain Maddie Carter definitely hadn’t graduated at the top of their flight class. If he hadn’t tutored her, she would probably still be sitting in that class. Although Maddie was extremely intelligent, math was not her strong suit, and a competent pilot needed that skill in spades.

“It is what I want, Hawk. I’ve worked hard for this, and deserve the chance,” she said.

“The chance to fly into hell and get yourself killed?” Hawk asked with a snort as he rolled onto his back away from her.

She was thirty-two years old, at a point in her life she should be thinking of leaving the military and settling down, not flying combat missions, which he knew is exactly what she’d be doing in Latin America, even though they’d be disguised as humanitarian and peace missions. The drug cartels had taken over there. They ruled those countries and governments now and the United States was determined to correct that.

Was he being selfish? Hell, yes he was, because her solo decision affected him too. Did she not give a flying fuck about them?

“What about us?” he asked, pinning her with his eyes.

He actually had a ring picked out to ask her to marry him to end this madness. The jeweler was sizing it right now, and he planned to ask her the next time they were together.

She scooted closer and put her hand on his face. Her eyes filled and her lower lip trembled. “I love you, Rhett. I just need to do this.”

“Well, I need you here,” he growled, shoving his hand into her hair to pull her to him and kiss her with the desperation he was feeling.

She moaned as Hawk pushed her onto her back to kiss her harder. He slid his hand over her silky curves and kissed her deeper as his and his cock settled between her legs where it belonged. Her wetness welcomed him, her mewls encouraged him, as he pulled her thigh up to his side and thrust his hips forward. A tremor of need rocked him and his head swelled as he entered her hot, slick passage.

“Mmm…” she moaned as her body stretched to take more of him inside. She wiggled her hips to urge him to move, clawed at his shoulders and whimpered for more.

Hawk dragged his mouth away to draw in ragged breaths. His heart pounded against hers, shattering with each beat at the thought of never seeing her beautiful face again, of holding her or being with her. She needed to know she had options.

“I love you, Maddie Carter. I’ve loved you since the first time I saw you.” Hawk said, swallowing the lump that formed in his throat. It was now or never. “Unconditionally. I love everything about you—just the way you are and you don’t have to work for it. I have no expectations other than you loving me back. You can just be yourself for the rest of your life and I will be a happy man.” A shuddering sigh escaped him. “I planned to do this the romantic way next weekend, but you just threw a wrench into that plan…”

Her body tightened around him as a low-pitched wail escaped her lips and her finger flew up to cover his mouth. “No, don’t, please—” she said, her voice barely there.

Hawk knew from the terrified look on her face he was about to be shot down, but he had to finish this. “I want you to forget about this madness, baby—stay here and marry me. I promise I will do everything I can to make you happy.”

“I can’t,” she said, tears spilling out of the corners of her eyes.

“Then I guess this is goodbye.” His own eyes burned fiercely as he kissed her, before he slid out of her body and pushed up to his knees. “Fly safe. It’s been nice knowing you, Maddie Carter.”

New York Times and USA Today Bestselling Author Becky McGraw writes happily-ever-afters with heat, heart and humor. A Jill of many trades, Becky knows just enough about a variety of subjects to make her contemporary cowboy and romantic suspense novels diverse and entertaining. She resides in Florida with her husband of thirty-plus years and is the mother of three and grandmother of one. Becky is a member of the RWA, Sisters in Crime and Novelists, Inc. 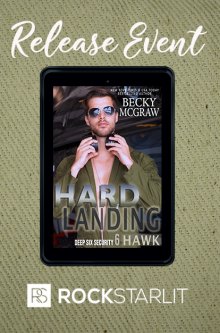