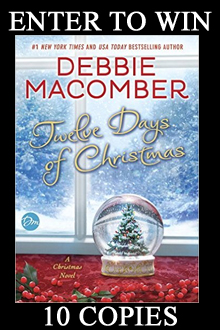 Our Lucky 10 Winners Are:

In a festive annual tradition, #1 New York Times bestselling author Debbie Macomber returns with another original holiday novel full of romance and cheer. This time around, a plucky young woman clashes with a real-life Scrooge—her grouchy, arrogant, annoyingly handsome neighbor—and tries to get even the only way she knows how: by killing him with kindness.

You agree to be added to the NOR Newsletter.

This contest is sponsored by Random House. The sponsor is solely responsible for the contest prize shipping.

Debbie Macomber is a #1 New York Times bestselling author and one of today's most popular writers with more than 170 million copies of her books in print worldwide. In her novels, Macomber brings to life compelling relationships that embrace family and enduring friendships, uplifting her readers with stories of connection and hope. Macomber's novels have spent over 750 weeks on the New York Times bestseller list. Eight of these novels hitting the number one spot.

Macomber owns the Victorian Rose Tea Room and A Good Yarn Shop, named after those she featured in her novels. She and her husband, Wayne, serve on the Guideposts National Advisory Cabinet, and she is World Vision's international spokesperson for their Knit for Kids charity initiative.

A devoted grandmother, Debbie and her husband Wayne live in Port Orchard, Washington (the town on which her Cedar Cove novels are based) and winter in Florida.