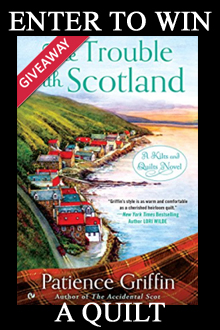 Giveaway: Win a Quilt to celebrate the launch of The Trouble With Scotland by Patience Griffin

Prize: Win a Quilt to celebrate the release of The Trouble of Scotland!

Open To: USA Shipping Only

The Trouble With Scotland - A Kilts and Quilts Novel, #5

The quilting ladies of the Scottish village of Gandiegow are known to piece together more than just fabric . . .

Life isn’t going as planned and Sadie Middleton is rethinking her whole future. Thankfully one thing is staying the same: She’s able to share her love of quilting with her grandmother Gigi. The two of them enter a contest and win an all-expenses-paid trip to the Kilts and Quilts retreat in the Scottish Highlands. But their victory turns hollow when Gigi passes away before they can go. Sadie is grief-stricken, but her brother convinces her to take the trip to Gandiegow anyway.

There she meets a charming circle of quilters who remind her of her grandmother—and Ross Armstrong, a handsome fisherman who brings a smile to her face. Newly single, Ross intends to enjoy his freedom. That plan goes awry as he comes to know Sadie—and a surprising spark is lit. Too bad some well-meaning folks want to protect Ross from getting hurt again and are determined to keep him and the American lass apart. . . .

To Scotland With Love - A Kilts and Quilts Novel, #1

Meet Me In Scotland - A Kilts and Quilts Novel, #2

Some Like It Scottish - A Kilts and Quilts Novel, #3

The Accidental Scot - A Kilts and Quilts Novel, #4

PATIENCE GRIFFIN grew up in a small town along the Mississippi River, living life in a close-knit community. She loves to quilt and has gained some recognition with her September 11th Story Quilt which has toured the country as the property of the Pentagon. With a master’s degree in nuclear engineering, she’s a nerdy girl to the core, but loves to read books which make her laugh. She lives in Texas with a hyper Sheltie, a Bishon-poo and a bulimic stray cat.