Giveaway: The Secret of Flirting by Sabrina Jeffries

Open To: USA ONLY

The Secret of Flirting - The Sinful Suitors Book 5

The moment spymaster Baron Fulkham meets the stunning Princess Aurore of Chanay, he's positive her royal persona is a ruse and that she's actually Monique Servais, the mysterious actress he met three years before in Dieppe. But as he pursues his suspicions, he uncovers a plot of attempted assassination and betrayal that could very well destroy his career, expose his own secrets...and ruin the woman he's rapidly coming to love.

The Secret of Flirting is a sizzling historical romance filled with fast-paced storytelling, an enchanting heroine, and a sexy hero, perfect for fans of Regency romance.

The print book giveaway over. The winner is posted in the comments. 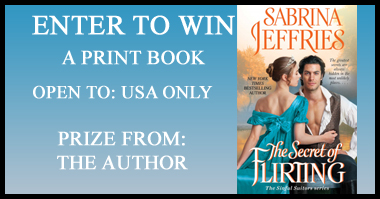