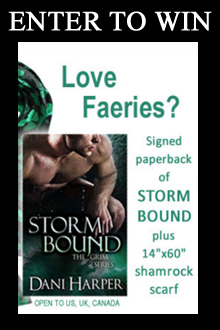 Kidnapped on his wedding day in the twelfth century and forced into a thousand years of servitude by a cold-hearted faery princess, rugged blacksmith Aidan dreams of nothing but revenge on his captor. Then the spell of a beautiful witch awakens him to the present day—and a passionate desire. But to build a future, he must first confront his past…

Modern witch and magic-shop owner Brooke doesn’t think her life is missing anything, until a wayward enchantment lands a brooding medieval blacksmith in her spell room—and in her arms. Yet even after their passion proves to be truly magical, Aidan’s first commitment is to vengeance. Now Brooke must team up with friends and ancient warriors alike—and push her own powers to their limits—to save her love from the wrath of an evil fae.

From the bestselling author of Changeling Moon, this thrilling and sensual novel adds a new chapter to Dani Harper’s Celtic folklore–themed Grim Series.