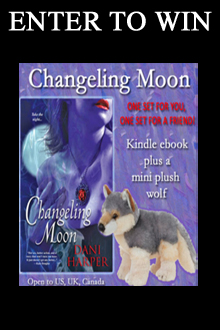 "Changeling Moon was chosen as a 2012 RITA Award Finalist in the Paranormal Romance Category, by Romance Writers of America."

He roams the moonlit wilderness, his every sense and instinct on high alert. Changeling wolf Connor Macleod and his Pack have never feared anything--until the night human Zoey Tyler barely escapes a rogue werewolf's vicious attack.

As the full moon approaches, Zoey has no idea of the changes that are coming, and only Connor can show her what she is, and help her master the wildness inside.  With her initiation into the Pack just days away and a terrifying predator on the loose, the tentative bonds of trust and tenderness are their only weapons against a force red in tooth, claw... and ultimate evil.