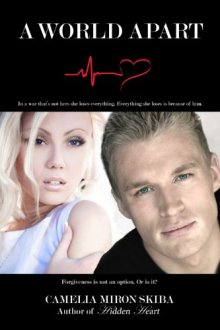 In a war that's not hers she loses everything.

Everything she loses is because of him.

Forgiveness is not an option.

Lieutenant Cassandra Toma, trauma surgeon in the Romanian National Army starts her deployment at the joint-unit air base M. Kogalniceanu on a wrong foot, clashing on her first day with her new commander, Major David Hunt. Her rebellious nature and sassiness rival her excellent performance in the operating room—the only reason why she’s not reprimanded, or maybe not the only reason.

They meet. They clash. A forbidden passion consumes them with the intensity of an erupting volcano, leaving her heartbroken and him with tarnished honor and pride as an officer. The only way out for David is disappearing into the dangerous warzone in Iraq. Their flame was supposed to be over when destiny brings them back under the same roof, this time with a common goal—to find Cassandra’s brother, Major Robert Toma, kidnapped by insurgents while on patrol.

To rescue Robert, Cassandra and David put aside their resentments, uniting forces against a common enemy. Trying to forget the painful past, Cassandra opens up to give David—and their love—another chance. What she doesn’t realize is that her anguish is the result of David’s impetuous action—one reckless choice he made for which she may never forgive him.

His mistake, his secret, could cost them both the love they’ve finally found.

Digital Items open International and Tangible Items USA Shipping Only - Unless Otherwise Noted - Prizes given away by sponsors and not Night Owl Reviews. The sponsor is solely responsible for the contest prize.