Gena Showalter is one of my favorite authors. I've been reading her since she published her first book. For those of you who have not read one of her books I encourage you to check her out. She writes paranormal that really pleases and has several series. Here are just some of her titles that I recommend.

When Santa Fe antique dealer Julie Anderson was curiously drawn to purchase a battered jewelry box, she never expected it to contain her own personal love slave. Especially not tall, dark and sinfully handsome Tristan-a man hard to resist, and determined to fulfill her every desire.

Though Tristan was a rogue of the battlefield and the boudoir, making love with Julia was like nothing he'd ever known. Yet revealing his true heart would break the centuries-old spell and separate them forever. And Tristan would do anything to go on loving Julia. . .even remain a slave through all eternity. . .

Females young and old, beautiful and plain crave Valerian's touch. None can resist his blatant sensuality and potent allure—until he steals Shaye Holling from a Florida beach and holds her prisoner in his underwater kingdom.

The cynical Shaye wants nothing to do with the mighty warlord, but she's inexplicably drawn to him. For underneath the warrior's arrogant beauty lies a complex and powerful man. A man whose caress is like fire….

Now Valerian must fight for the privilege of claiming her as his own. Because there's one thing Shaye doesn't know….

That when a nymph discovers his true mate, she's his for life.

Deep Kiss of Winter (Along With Kresley Cole)

Kresley Cole brings us the story of Murdoch Wroth, a brutal vampire soldier who will stop at nothing to claim Daniela the Ice Maiden -- the delicate Valkyrie who makes his heart beat for the first time in 300 years. But Danii is part ice fey, and her freezing skin can only be touched by her own kind. In Gena Showalter's story Aleaha Love can be anyone -- literally -- and her newest identity switch has made her an alien investigation and removal agent. 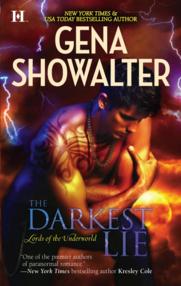 The Darkest Lie - (Lords of the Underworld)

Forced to his knees in agony whenever he speaks the truth, Gideon can recognize any lie—until he captures Scarlet, a demon-possessed immortal who claims to be his long-lost wife. He doesn't remember the beautiful female, much less wedding—or bedding—her. But he wants to…almost as much as he wants her.

But Scarlet is keeper of Nightmares, too dangerous to roam free. A future with her might mean ultimate ruin. Especially as Gideon's enemies draw closer—and the truth threatens to destroy all he's come to love….

Heart of Darkness - This is an anthology that Gena took part in. All the stories are enjoyable thought.

From the masters of paranormal romance, three brand-new tales of seduction…

The Darkest Angel by Gena Showalter

A Lords of the Underworld tale

An iron-willed demon assassin, the angel Lysander has never known lust—until he meets Bianka. Spawned from the bloodline of Lucifer, the beautiful but deadly Harpy is determined to lead the pure-hearted Lysander into temptation….


Love Me to Death by Maggie Shayne

Twenty-two years ago four teenage boys were convicted of a young girl's murder. Now, in the form of a beautiful woman, the "victim" is seeking vengeance. And only one man dares to dig into the past to uncover its secrets… and set her free.

Lady of the Nile by Susan Krinard

Lady Tameri believes herself to be the reincarnation of an ancient Egyptian princess, and Leo Erskine has set out to prove her wrong…never dreaming that the two of them are about to discover a prophecy that will bind them together forever.

The Darkest Whisper (Lords of the Underworld)

Heart of Darkness: The Darkest Angel\Love Me to Death\Lady of the Nile

Lords of the Underworld Bundle

Playing with Fire (Tales of an Extraordinary Girl, Book 1)

Heart of the Dragon (Atlantis)

The Darkest Facts: A Lords of the Underworld Companion

Demon from the Dark