From Idea to Publishing Company

We are all born with what Bill Hybels calls a “White Hot passion”. Something we feel inside we want to accomplish no matter what it may be. We might not even know what it is until we experience an epiphany. That one “Aha!” moment when we realize we know what we want to do in life.

For me, it started when one dream began to slowly burn down to cinders.

Something I had done for fifteen years of life began to feel empty and hollow. A dream I long thought was my own only to come to realize it belonged to someone else.

It wasn’t until one night when I finally came to grips that conceptual art and design wasn’t meant for me. Unknowingly, Word popped open on the screen. That little cursor blinked at me with curiosity of what I was going to write.

What does this mean?

It means the community saw the story and decided it was worth giving one of the highest statuses the site could offer.

Then I knew. I wanted to write. I was meant to write.

Up until I met a friend and read her amazing work, I was only writing short stories.

When I opened one of her books, I became inspired to write romance novels. She had such beautiful writing and gorgeous and sexy characters that it ignited a spark!

I wanted to write the world of passionate romance. The slow burn, the intimate passion. Something about it just felt natural.

At first I wanted to try and get traditionally published out of fear of failure. I was afraid I couldn’t get a single book out in a world I thought was overly saturated. When the attempt didn’t pan out and wound up nearly crushing the ambition, I decided to take matters into my own hands.

I would make my own company and publish my own books. I would learn how to market, how to edit and how to format. I sought out mentors in rigorous hours of research and emails thinking if they could do it and be successful, so could I.

At first, I didn’t know what to do. The dream seemed out of reach. It seemed overwhelming. Then I heard the song. The song from Charlie Brown singing “yuletide by the fireside.”

It got me thinking. “What do I like to do?” I like curling up next to the fireside on cold nights with a warm cup of coffee, a blanket and a book.

Fireside Publishing was born from this idea but it wasn’t quite me. Not yet. The “I” in Fire and Side became “Y”. Now it was me. Now it was Blaise.

The idea of having the company seemed like it would drown me at first.

Yes, I had the company but what were its goals?

I knew I had the drive but how would I build the brand?

Then it hit me, I needed to focus on the readers. Give them something back to bring their attention towards the company so I expanded. I needed to learn how to market not only the book but myself.

FyreSyde would offer reviews, interviews, guest posts and eventually went further by signing up to post content from the tour companies I work for. It would follow what is known in marketing as the 80/20 rule. 80% of the focus would be on the readers. 20% would go to my own books and promotion.

The whole endeavor seemed incredibly hard. It seemed impossible and if I were completely honest, it would have been if it weren’t for the drive. A dream can only happen if one has the drive.

Blessing of Luna was born from that drive. It became what it is to this day – a four book series from only a dream and a short story.

Anything is possible if your passion burns hot enough and your grit is strong enough.

That's how it felt when Damien Pierce returned to Big Timber, Montana. It had been his childhood home until the day he was hit by a speeding car only to learn he wasn't badly hurt. The experience landed him the label of the town freakshow.

Following the death of his foster mom, Damien soon disconnected from the world around him. That was at least, until he met her. She looked human but something about made her appear otherworldly to him. He knew he shouldn't but he wanted her. He would do anything to get to know her. To have her.

Jillian Styles was immortal. Cursed by a dark god never to find rest. A shifter capable of taking the form of a beautiful wolf. She had searched for her lover's reincarnated soul for centuries only to find he was nowhere to be found. When she meets Damien, her world is turned upside down. She falls in love with him instantly and begins to pursue him.

However, Damien soon learns the darker part of Jill's world. He finds himself on the hit list of the same vampire Lord responsible for killing Jill's lover and reigniting the flames of an old war. His daughter desires Damien and vows to have him at any cost.

With the help of Alexander Kain, the mysterious wolf shifting soldier, Damien will learn what he thought he knew was only tip of the paranormal iceberg. He soon finds himself in the eyes of a vindictive and rage-filled dark god.

If you like hot lycanthrope guys, overly possessive vampire chicks, vindictive gods, strong female leads and some hot sex scenes, this book is for you.

With the help of Alexander Kain, the mysterious wolf shifting soldier, Damien will learn what he thought he knew was only tip of the paranormal iceburg. He soon finds himself in the eyes of a vindictive and rage-filled dark god.

If you like hot lycanthrope guys, overly posessive vampire chicks, vindictive gods, strong female leads and some hot sex scenes, this book is for you.

Blaise Ramsay is an author, mother and full time college student currently attending Ashworth College while working on her first romance novel series in the MC genre, Repentance: A Wolfpack MC Novel is set to be released next year with two other books in the series and a character book for Cobra. After working in the character design and digital art field for almost 15 years with experience in the indie gaming industry, Blaise switched her efforts to weaving stories with words, thus giving birth to her desire to bring books to life. She currently works at home with her two children, husband, dog and four rats in the great state of Texas. 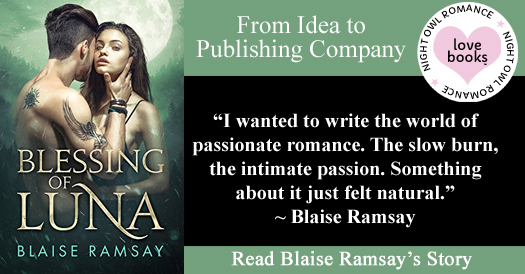